Vacation in Sidi Ifni On the Shores of the Atlantic, Your Morocco Tour Guide 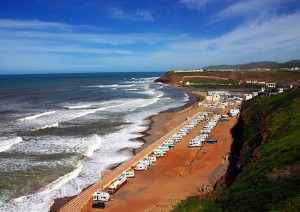 Sidi Ifni is some two hour’s drive from Agadir and is unique because of its much admired Spanish Art Deco buildings built when it was a Spanish enclave from 1934-1969. A vacation in Morocco’s Sidi Ifni on the shores of the Atlantic of Agadir is a great way to pass the summer months. The cliff top views of the sea at Sidi Ifni and the beach are impressive. There are two buildings built like ships with portholes near the steps down to the beach and there is a striking lighthouse overlooking the sea. A former church now the law courts and a former Spanish consulate with its windows bricked up lie around the Place Hassan II, formerly Plaza de Espana along with the governor’s house which is now a royal palace.

A number of the old Spanish buildings have undergone some renovation and have been freshly painted in white and blue. In July and August a sea mist sometimes shrouds the sea and the cliff top caused by the colder sea hitting the sun baked shore. 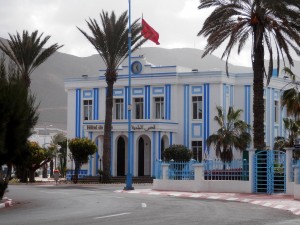 There are long avenues and Spanish streets still with their original street names like Calle Gomara and Calle Ceuta as they were when the Spanish population left the town in 1969. Just off the beach is the former cable car rigged up to ferry supplies up the cliff to the town. The old cable car can still be seen and was an ingenious way to deliver supplies to the town from Tenerife. There is also a disused airfield which now hosts a lively souk with bric a brac displays of old antiques reminiscent of such seaside haunts as Brighton in the UK. There are also displays of carpets, kelims, Berber jewelry and other handicrafts along with many vegetable sellers . Sidi Ifni is also a market town and the Berber Ait Baamrane tribe are the inhabitants of the surrounding agricultural region. The streets of the Moroccan built part of the town lies under a large hill and are lined with pavement sellers and cafes and there is relaxed atmosphere combining a rural market day on Sunday with the town’s attraction as a seaside resort . There is also a covered souk selling Moroccan dresses and djellabahs as well as other handicrafts and toys. Sidi Ifni has an important fishing industry with a special fishing port and there are many different types of fish for sale in the souk’s municipal fish market. 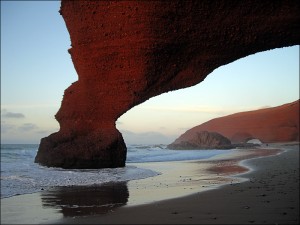 In the late 1950’s the Moroccan Liberation Army which fought in small guerilla bands waged a determined war against the Spanish Foreign Legion winning back Laayoune and the south and finally most of the Sidi Ifni region. The Sidi Ifni war was called the forgotten war but it involved the Baamrane tribe and the region in sustained fighting. On my trip to Sidi Ifni via Tiznit from Marrakech I travelled with a Moroccan friend and his family. We stayed at my friend’s uncle’s farm in the Ait Baamrane countryside in a valley surrounded by mountains. Beside the farm was a well constructed well which had been left by the French who had stationed a battalion there whilst pacifying the area. The rest of the camp had been erased. My friend told me that his father fought with the Moroccan Liberation Army from 1955-7. He recounted how a Spanish patrol forced their way into his father’s house looking for him but he was not there. His mother and the two older children, then very small were frightened but unharmed. His father eventually joined the Moroccan Army and ended up as a senior sergeant at Army headquarters in Marrakech. He retired and died earlier this year, I had known him for over 20 years. His name was Jama Ait Bausakif. With the years of fighting and the suffering and losses involved in what is still living memory, it is not surprising that Moroccans are reluctant to remeber their colonial past and refurbish the Spanish Art Deco buildings. In fact a number of buildings have been renovated but more remains to be done and it is expensive.

Travelers do like the Art Deco buildings and the town’s administration understand this. Hopefully they can be seen as a delightful architectural experiment, part of Morocco’s heritage from a bygone era. When the French left in 1956 the writing was on the wall for the Spanish inhabitants of Sidi Ifni and they left in 1969 following international pressure from the UN. Sidi Ifni became a sad ghost town. Now it is an enchanting seaside resort and local market town which all can enjoy. The Hotel Suerte Loca and the Hotel Bellevue are recommended and the restaurant Café Nomad. There are even two bars on the beach which is also good for surfing. Ten miles north of Sidi Ifni is the much larger Legzira beach at Sidi Ouarzik and the nearby small town of Mirleft between Tiznit and Sidi Ifni has several fine beaches for surfing and several low cost hotels. There is even an English run bed and breakfast, Sally’s Bn’B and a pub, the Sunset cafe just off the main street.

Where to Stay in Sidi Ifni:

Where to Eat in Sidi Ifni: