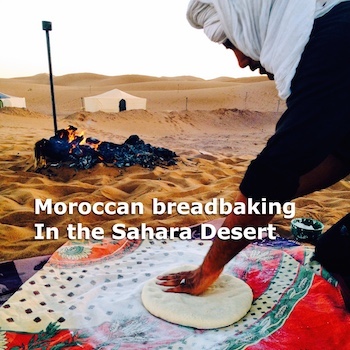 Bread baking in the Sahara, Photograph by Amanda Mouttaki

“The children of him who has wheat in his house should not beg of his neighbor.”

“Manage with bread and salted butter until God brings something to eat with it.”

“There is no hunger but the hunger of wheat.”

There are plenty of things you will not find on a typical Moroccan table such as silverware, water glasses and individual plates. However there’s one thing you will always find, and that is a hearty basket of bread. As age-old Moroccan proverbs illustrate, Moroccan bread is a vital part of the diet and culture. Morocco’s terrain is dry and the land is harsh geographically. Bread is the one food that binds people together at a meal and can be made relatively inexpensively with few ingredients. Wheat can be kept and used over time when fresh ingredients are more difficult to come by. Dry bread provides sustenance for a population that today still remains semi-nomadic.

Visit any village in Morocco during the wheat harvest season and you will see women in colorful attire across the fields sifting kernels of wheat in woven baskets, removing the bits that are inedible before grinding to flour. Families work together in unison within the fields collecting the grain. Not a single kernel is wasted. The grain is sold and traded among families across rural regions as well as being kept until the next harvest. Moroccan bread is a prized food.

In urban areas of Morocco where there are no family plots to tend Moroccans make bread in their home or purchase ready-made bread. The varieties of breads that Moroccan families can purchase are many ranging from typical white to grain, sesame with anise and barley. As the result of Moroccan subsidies bread is affordable to all.

How Bread Is Made Across Morocco:
Across Morocco there are several ways of making Moroccan bread and also many varieties of preparation. In the Sahara Desert region, the traditional way of baking is to build a hot fire on top of the sand and then bury the bread once it is hot enough. Another Southern bread baking tradition indigenous to the Draa Valley, Saghro region is to bake bread stuffed with fat, spices and herbs directly on volcanic rock, which produces a pizza-like thick doughy bread called bourafin. In the mountains an oven resembling a tandoori oven is used, the dough stuck to the sides of the clay oven and baked over fire to produce a charred loaf of tafernout.

In the north of Morocco kalinti is a bread made with chickpea flour. There are also several iterations of stovetop breads like msemmen, harsha, and batbout. In Moroccan cities the practice of bread baking is gradually dying out as the result of ready-made bread and a generation of new working class that has no time to bake. Bringing the daily bread (khobz) to the traditional oven was once a central part of life. 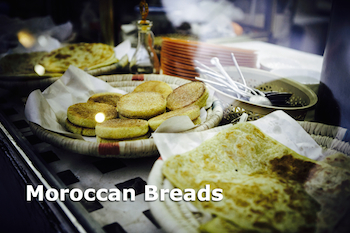 In traditional Moroccan homes women kneed their dough in the morning; flattening it into characteristic round loaves and covering it with a cotton cloth. Then, they placed it onto a tray or wooden board and either give it to one of their children to drop off on the way to school or leave it outside the door. A neighbor or another person passing by who saw the tray instinctively pick it up and drops it off at the oven. At lunch it was picked up and paid for, each loaf a flat rate. In the ovens, dozens of loaves at a time are baked. The baker always knew which bread belongs to which tray and family. The baker was also the eyes and ears of the community through his close, daily interaction with the neighbors. He could tell how well off a family was, how often they had company, and more based on passing words when coming in or the bread itself. When an engagement was in the works, the baker was often consulted for inside information on the prospective bride or groom’s family.

Bread is the utensil used to eat. It’s broken off (never cut with a knife) and used to scoop up tajines, soak up sauces, and savor soups. It’s drizzled with olive oil and served alongside a hot cup of tea for breakfast or stuffed with tuna or boiled eggs for a snack or late night meal. When there’s little else in the cupboards there’s bread to tide over an empty stomach.

Bread is held in very high esteem in Morocco. It is never thrown in the garbage and the first reaction when dropped on the floor is to immediately pick it up and kiss it. The very basic ingredients in Moroccan bread mean that within a day or at most two it is dry. Dishes like treda make use of bread that’s stale. It’s shredded and put in the bottom of a plate and then topped with spiced lentils, sauce, and chicken if available.

To dispose of bread scraps that cannot be salvaged the garbage is not an option. They’re put in a bag separate from the other waste and when collected set aside by the garbage man. It’s then fed to animals or used as compost.

The sacredness and special place bread holds in the Moroccan culture and home is not without challenges. Those who struggle with illnesses like celiac disease face an uphill battle. For many Moroccans it’s unfathomable that bread could make someone violently ill. For visitors this can be a difficult bridge to cross.

Every culture has a particular food item that serves as a staple and the Moroccan love affair with bread remains a steadfast part of the Moroccan culinary tradition.

For more information about Bread Baking on a Morocco Private Tour

Amanda Mouttaki is a food and travel writer and blogger, with an expertise on Moroccan culinary traditions and food culture. Her passion is uncovering the stories behind traditional cultures and food around the world. She lives in Marrakech, Morocco with her family. 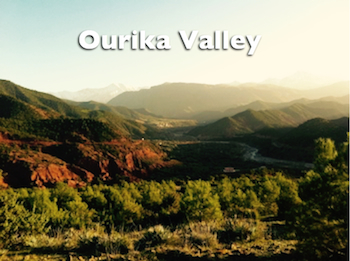 The bustling red terracota colored city of Marrakech is dotted with magnificent views of the High Atlas Mountains and surrounded by lush valley’s and a desert-like palmeraie. Marrakech is the perfect city to use as a base for Day Trips. Often referred to as the Paris of Morocco, the city of Marrakech is well appointed in Morocco’s south. Mararkech is just three hours from Morocco’s Atlantic coast and the Essaouira Medina, an hour from the Ourika Valley and a full days drive from the Sahara Desert. Consider taking a one week holiday in Marrakech as to allow for these various Moroccan Day Trips.

Ourika Valley & Ait Ashok
A favorite weekend getaway for Marrakech’s is the Ourika Valley. This quaint region is appeciated by locals for its valley’s, streams and the seven Setti Fatma waterfalls. Ourika is perfect for long walks, hiking, visiting a Berber villages and is filled with palm tree plantations, fruit trees, tiny hamlets, summer homes and road side cafes. Travelers can enjoy tea and break bread with a Berber family on this day trip from Marrakech.

For those looking to experience off the beaten path Ourika consider exploring the charming Berber vilage of Ait Ashok. Nestled in a secret location inside the Ourika Valley and not frequented by many travelers, it offers unforgettable views, authentic encounters, and an unclose experience to meet local villagers of of Tizi Oucheg.

Ourigane Valley
Nestled in the High Atlas Mountains of Toubkal National Park, this region is a must see for travelers interested in a low key, non touristic day trip from Marrakech. Ourigane Valley is ideal for relaxing and hiking. It’s various flora and fauna makes for the idea location to sip mint tea with a view. The Ourigane VAlley also home to one of Morocco’s oldest Jewish Zaouia sites, the shrine of Rabbi Abraham Ben Hammou. Ourigane boasts fresh Atlas air and small properties for longer stays such as the classic La Roseraie famous for it’s 30 hectares of rose gardens and stables and the new, contemporary Hotel L’Amandier. 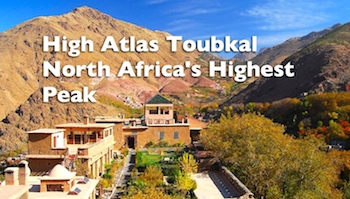 High Atlas Toubkal & Imlil
The High Atlas Toubkal Mountains are the second highest in Africa second to Kilamanjaro and the highest peak in North Africa. Toubkal and the village of Imlil offer scenic activities for hikers on a day trip from Mararkech. A day hike at Mount Toubkal allows for trekkers to explore the region’s varied peaks and have lunch in a Berber village or at Kasbah Toubkal with views. The village of Imlil is small and windy with local shops selling Berrber silver jewelry and Moroccan goods. Filled with street cafes and guests houses, Imlil is a good refuge for hikers. 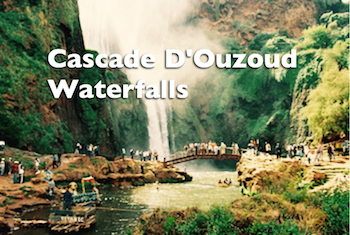 Cascades D’Ouzoud Waterfalls
The Ouzoud falls, just a few hours from Marrakech boasts three tiered beautiful waterfalls and a lush valley. Ouzoud offers many trekking options. Visitors can take a wooden paddle boat trip at the bottom of the falls or a cold dip in the falls which makes for a charmed experience. Outdoor cafe stands conjure up the atmosphere with fresh cold orange juice and Moroccan snacks. A favorite of Marrakechi’s, picnicing at Ouzoud is also popular in spring and summer months. For Morocco travelers who have more then a day trip from Marrakech available, an overnight stay can be arranged at a Berber guest house. The Berber guest houses in Ouzoud are secluded with spectacular views, local cuisine and Moroccan hospitlaity.

Oukaïmeden
Oukaïmeden is Africa’s highest peak for skiiing and a Morocco premiere ski resort. Oukaïmeden village is perched on Jebel Attar and just an hour from Marrakech. Adventure seekers and skiiers can enjoy Oukaïmeden’s windy slopes and chair lift to ferry them across the Atlas. Local cuisine is available at many of the Ski houses nearby, year round. Off season Oukaïmeden makes for the pefect getaway given its cooler temperatures and remote Atlas Mountain scenery. The region of Oukaïmeden is also known for its history of prehistoric rock carvings. The local musuem in Oukaïmeden provides more information on this and visitors can also explore with their Moroccan guide to discover rock carvings in the surrounding area. 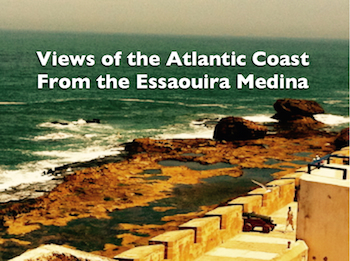 Essaouira Medina
This former Portuguese fished village once called Mogador is just three hours from Marrakech located on Morocco’s Atlantic Coast. Essaouira has lovely white washed and blue-shuttered houses that create a scenic backdrop of coastal romance. Essaouira’s seaside medival medina offers mouth watering seafood, thuya workshops and art galleries. A hippy colony with chic restaurants that cater to foodies, Essaouira is ideal for contemporary gastro-fare and a great place to enjoy sunset cocktails. The Essaouira medina is only 8 kilometers from the Ounara winery and a Frommagerie where travelers can learn cheese making or enjoy a five course menu of cheese inspired dishes. The Essaouira medina as a Morocccan day trip from Marrakech is a layed back option for couples, small groups and families.