The Caravan Routes of Morocco 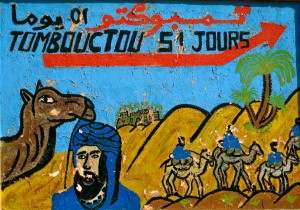 There is a much-photographed sign in Zagora, in the spectacular Draa Valley in Morocco. Beside the image of a blue-swaddled desert nomad is written: “TOMBOUCTOU 52 JOURS.” The journey is considerably quicker today, but if you go by camel, it probably still takes 52 days. Zagora is a popular starting point for trips on camel back into the Sahara Desert and this famous sign gives some indication of the significance of this area back in the mists of history.

Camel caravans (or – more accurately – dromedary caravans, as it is the one-humped version that is used in the Sahara) have existed since the 3rd century; the last caravans were officially closed down during the French and Spanish Protectorates in 1933.

For centuries the camel trains were the main means of transportation of goods and people between North African ports and economic hubs (such as Marrakech and Fes), across the Sahara to sub-Saharan Africa and eventually the Levant. For example, the camels travelled from as far West as the Moroccan Atlantic Coast right across to Ethiopia and Sudan in East Africa. An important north-south trade was salt (from Morocco) with gold (from the then Ghana Empire). One of the key caravan routes connected Tifilalt in Morocco, one of the largest oases in the world; Sijilmassa, an important salt mine; Tindouf in the deep south of Algeria, and Timbuktu in Mali. 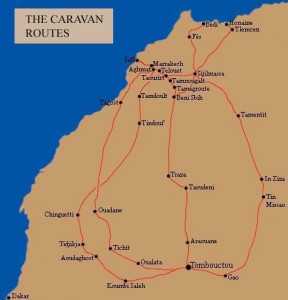 Map of Caravan Routes of Morocco

Cloth, manufactured items and paper were brought in from Europe. On the return leg, they carried gold, slaves, ivory and ostrich feathers as well as beads and shells for currency. On the way, the traders may have picked up silver, salt, dates or handicrafts for exchanging on route. Slaves flowed in both directions, but particularly northwards. It has been estimated that from the 10th- 19th century, as many as 7,000 slaves were transported northwards into Morocco.

The procession of the camel train was a carefully planned affair. In previous times, the Sahara fringes and the Sahel were greener than today and the camels would be fattened for a number of months on the plains before being rounded into a caravan. The famous 14th century Moroccan explorer, Ibn Battuta, describes the size of the camel trains: 1,000 camels but occasionally as large as 12,000.

The leaders of this solemn procession were well-paid Berbers and Touareg tribesmen who literally knew the desert like the back of their hands. Along with their camel herds, this knowledge was a valuable commodity. Furthermore, they had invested time in building the relationships and connections necessary to ensure safe passage of the valuable cargo. The routes changed according to these allegiances, the rise and fall of economic might of different towns and cities and – importantly – the existence of rivers and oases, many of which in the desert are ephemeral and unpredictable. Runners would sometimes be sent ahead to oases to bring water back to the caravan because of the difficulty of transporting the water necessary between sources. It was not unusual for them to travel 3-4 days in each direction to provide this service.

The peak of the caravan trade coincided with the boom in the fortunes of the Islamic rulers of the greater Maghreb and Al-Andalus region, from the 8th century until the late 16th century. These routes were even responsible for the spreading of Islam from North Africa into West Africa. The decline was caused by improvements in maritime transport by the European powers and the discovery of gold in the Americas. However, the link between, for example, the port of Mogador (modern day Essaouira) and Timbuktu was significant as late as the 19th century, when Jewish traders in both cities exchanged goods and slaves from sub-Saharan Africa with produce imported from Europe and further afield, such as gunpowder tea from China.

Today, some sections of the routes are passable. In fact, many of the unmade trails used today by all-terrain vehicles to traverse the desert are actually the remnant of the old camel routes. Modern political tensions have made many Saharan borders impassable to tourists and travellers. However, the local tribesmen still know the routes and still use ancient navigation techniques passed down through the generations. It’s unlikely they would let a modern construct such as a line on a map hinder their passage!