8 Places to Go for Casablanca Nightlife 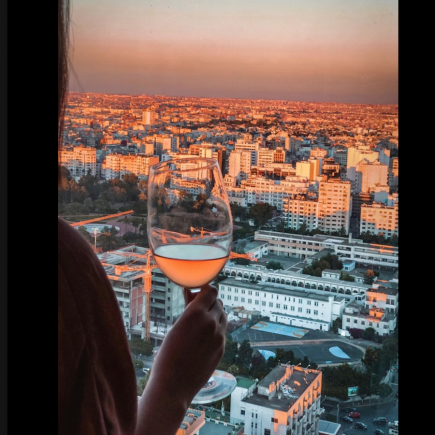 Long before Michale Curtiz’s iconic 1942 film, Casablanca became a box office smash, Casablanca, the city served as an important business and commercial center. The Portuguese used the ruins of Anfa to build a military fortress in 1515. The town that grew up around it was called Casa Branca, meaning “white house” in  Portuguese. Today locals refer to the bustling and cosmopolitan port city as Casa.

When the Tangier Med port became crowned the Mediterranean’s largest, Casablanca was even recognized as North Africa’s top entrepot. Beyond its importance as the leading financial capital, Casablanca is also known for its strength in the arts. France and Morocco’s artistic and intellectual circles were primarily privy to this burgeoning community. Renown artists such as Moroccan modern painter Mohamed Melehi- recognized who linked Bauhauism to Islamic art- have long made an impact on the city. Melehi, alongside his innovative “Casablanca School” peers like Farid Belkahia, Mohammed Chabâa, Bert Flint and Toni Maraini influenced post-colonial art during the 1960s in both Casablanca and beyond. The city’s artistic and cultural history created a foundation that continues to attract innovative designers, filmmakers, artists, photographers, and musicians. 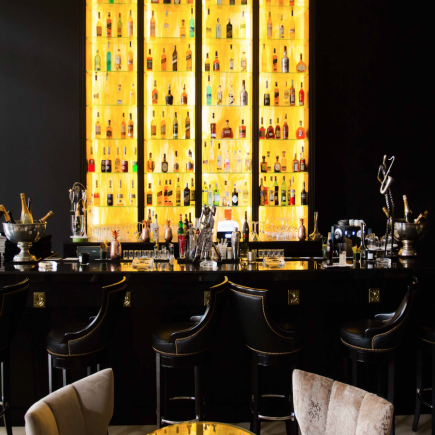 Casablanca’s trendsetting and liberating ambiance is woven into the fabric of everyday life. Gradually the city has had a ripple effect and eyes around the world are tuning into Casablanca’s art and culture scene. This shift was particularly evident in 2019 when several airports in key cities like Boston, Philadelphia, Beijing, and Miami added direct routes to Casablanca. Now that traveling to Casablanca can be done with ease, the city’s top restaurants, nightlife, shopping venues, artisanal craft markets, the medina and music festivals are in high demand.

Casablanca offers a wide range of dining experiences coupled with live music. Nightlife can be found in elegant restaurants, jazz bars, clubs and upscale hotel settings located around the United Nations Square and on the Corniche. The Corniche is well-appointed near Casablanca’s business district and frequented by the fashionable Ain Diab neighborhood crowd. It is also considered one of the city’s green areas. Casablanca’s most popular French restaurants, nightclubs, cocktail lounges, and bars that boast wrap-around terraces and stunning ocean views are woven into the streets on the corniche.

1. Le Petit Rocher– founded in 1932, the Little Rock House is a renovated waterside bistro cottage that once served as a lighthouse. Its history includes hosting performances of talented musicians during the 80s and 90s. Today the restaurant stands as a cultural institution that has endured several, stylistic makeovers. In spite of this, it has stayed true to its musical roots. Over the past decade, Le Petit Rocher has been reimagined into an elegant and contemporary space with coastal views. In keeping with the past, it is also one of Casablanca’s top choices for an evening of tasty food and lively music. In 2000, Little Rock focused on recreating a menu for the senses. Today it serves fresh seafood, inclusive of seafood platters, paella, and other fresh catch of the day. Le Petit Rocher is an ideal spot where locals and travelers can enjoy cocktails, music and ocean views.

2. Bodega- located near Boulevard Mohammed V Art Deco, in the heart of Casablanca’s Art Deco district, La Bodega is a hybrid tapas bar-restaurant. It is the perfect destination for those interested in listening to everything from salsa to Arabic pop. The restaurant offers a fusion of both  French and Spanish cuisine. La Bodega’s innovative tapa style menu is curated by Chef Jilali and serves up Andalusian and Catalan inspired charcuterie, seafood, and mixed grill. Beyond its savory delights, La Bodega’s wine list is extensive and is especially enjoyed when the restaurant transforms from a rustic and cozy space into a saucy Jazz Club. Every Tuesday night, the club hosts a jazz and blues band with musicians who play music inspired by Paris’ top Jazz venues. 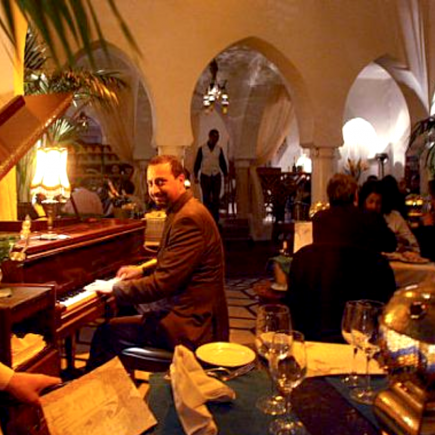 3. Rick’s Cafe- this romantic restaurant and piano bar was inspired by the 1942 film Casablanca made famous by Humphrey Bogart and Ingrid Bergman. Since it’s 2004 opening, the restaurant has set a high bar for dinner and jazzy evenings in Casablanca. From Tuesday to Sunday, Issam Chabaa plays classic French, Spanish and Brazilian songs on the piano and American favorites like Summertime, The Lady is a Tramp, and Blue Moon. Sundays, in particular, are programmed to host jazz sessions for local and amateur jazz musicians living in Casablanca or passing through. In addition to its superior entertainment, the two-floor romantic eatery is distinguished by its decor. Curved arches, a sculpted rooftop bar, balconies, balustrades, stenciled brass lighting, and an authentic 1930’s piano have thoughtfully been added to transport clients into the ’40s and ’50s. Among the menu items are fresh fish entrees like sole meuniere or richer selections like steak or foie gras and goat cheese salad. Rick’s Cafe was established by the former Kathy Kriger, who was an American diplomat in Morocco. Once a  traditional Moroccan home in the 1930s, Rick’s Cafe is located on the edge of the medina, near the port, facing the Hassan II Mosque.

4. Skybar 28- is well-appointed at the top of the five-star 28 stories B-Twin Center, Kenzi Tower Hotel It is considered the top destination for visitors to Casablanca who is in search of cocktails and dinner with a view. The luxurious hotel tower was designed by the internationally renowned architect Ricardo Bofill who thoughtfully opened up the restaurant to profit from the Atlantic Ocean views. The Art deco themed penthouse bar has an intimate lounge setting and subdued lighting. Skybar 28 is the perfect setting for an evening of classy tapas, wine, and live music after a day of exploring Casablanca. For travelers who want to indulge in some light pre-cocktail activities, the Kenzi Tower location is also home to Casablanca’s trendiest shopping district

5. Cabestan- created in 1927, this trendy, upscale seafood restaurant offers some of the most spectacular views of the Casablanca rocky coast. A favorite of artists, designers, politicians, and businessmen Cabestan is the place to be post-sunset. Designers Sophia Sebti and Yachar Bouhaya created three elegant spaces that have become the choice destination for those who desire an evening of fine bistro cuisine accompanied by music and an exceptional ambiance. In addition to the stunning sea views, Cabestan’s menu, created by Chef Fabien Caboy, is the reason it continues to buzz. Menu favorites include Mediterranean tapa dishes, fresh oysters from Dakhla, and herb-infused linguini and clams pasta. On some nights, top names from Morocco’s electronic music scene can be spotted here.

6. Le Kimmyz – is a lively French bistro with a high-quality gastronomy menu and extraordinary wine selection. Depending on the day of the week, the restaurant’s funky decor transforms from being a Parisian style musical brasserie into an upscale sports bar. Regardless of the day you choose to dine, the food and wine always hit the mark and the atmosphere never ceases to entertain. 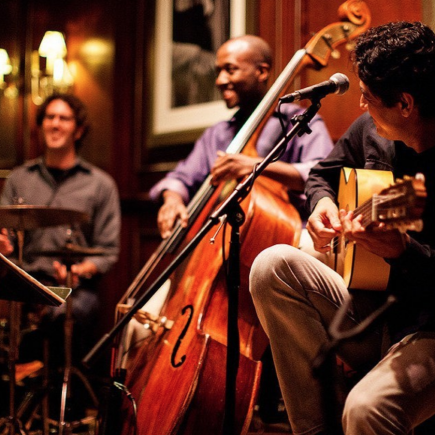 7. Le Jardin del Opera- is a chic brasserie situated across from the Grand Casablanca Theatre. It is defined by Casablancans and travelers to Morocco by its French heritage, culinary menu and inspired “garden opera setting”.  Le Jardin’s concepts are executed by restaurant head Farid Al Achbili and director Joël Boivert. The menu has been set to meet a high standard with its offer of exotic yet simple cuisine. Dining choices are comprised of original recipes that respect fresh ingredients of the season. Le Jardin del Opera’s foie gras with Moroccan white wine pairing is not to be missed. Evenings at this boutique venue are festive with music and ideal for close friends, and romantic tête-à-têtes. 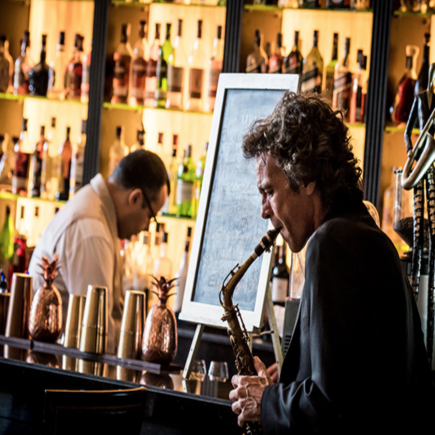 8. Le Casablanca Lounge Bar –  is situated inside Le Casablanca Hotel, a luxurious property in the exclusive Anfa neighborhood.  This trendy lounge, Art Deco bar immerses visitors in a world of glamour. It offers a warm and relaxed atmosphere to appreciate a wide range of signature cocktails, aperitifs, wines, and champagnes.

The cocktail bar is staged in a harmonious space of high ceilings, chandeliers, luxurious red and black velvet sofas, marquetry furniture, haute couture beveled mirrors, and accented handmade stucco lace. This timeless and classy ambiance is woven into every detail and space of the hotel. Taste of refinement and elegance can be found at Le Casablanca’s terrace while sipping a glass of champagne. Live music and piano performance are offered,  accompanied by a professional singer.