Essaouira owes much of its past, present and future to its situation on a bay sheltered from the fierce trade winds of the Atlantic Ocean by an archipelago of small, rocky islands. Towards the end of the 18th century, Sultan Sidi Mohammed Ben Abdullah (Mohammed III) created a strategic role for Essaouira in his new trade policy oriented towards the Atlantic. He instructed the construction of the Kasbah (King’s Quarters) and the Skala fortifications which became the basis for the medina (old city) we see today. He ordered the closure of Agadir harbor, further south, and effectively routed a large amount of trade between Europe and West and Central Africa through his new port. The Sultan was the first Head of State to recognize US Independence in 1776, thereby creating a strategic linkage in support of his trade objectives in Morocco.

In order to ensure the success of his strategy, Sidi Mohammed Ben Abdullah invited 10 prominent Jewish families from the key commercial centers of Morocco to settle in what was known then as Mogador and manage the trade. These families were largely the descendents of those expelled from Andalusia at the end of the 15th century and had gained a strong reputation for their skills as merchants. They became the “Tujjar as-Sultan“, the Sultan’s traders. These families – and many foreign consuls and negociants – settled in the newly-built houses of the Kasbah, which featured typical Swiri architecture of rooms set around a colonnaded interior patio, the latter often large enough to accommodate merchandise. Such buildings can be seen in the area near Bab el Minzeh and Bab Sbaa and along Rue Laalouj, where the French Institute and Sidi Mohammed Ben Abdullah Museum are excellent examples. 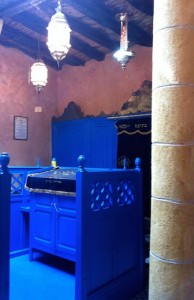 By the start of the 19th century, the population of Essaouira was majority Jewish. There were as many as 40 synagogues. Some, like the Simon Attia synagogue were the private synagogues of a large family, while others, such as the Slat Lkahal, were community centers of worship. As the affluence of the city grew, it attracted many migrants from the rural areas, seeking economic opportunities. The Mellah, a typical feature of a Moroccan city and a principally Jewish neighborhood, was built to house these families. Essaouira also had a Mellah Kdim, the “old Mellah”, which was an extension of the Kasbah and housed the Jewish middle classes. Mogador was unique in Morocco in that Jews, Muslims and Christians – those of Jewish, Berber, African, European and Arabic descent – lived side-by-side. There was a fruitful exchange at all levels of society, from artisans like silversmiths passing on their trade, to the interchange of intellectual and musical influences such as seen in the Andalusian music which continued to be taught and performed in Mogador long after the flight of Jews and Muslims from the Iberian Peninsula. 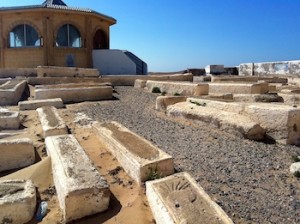 Today, there are a number of Jewish sites which can be visited and/or are under renovation in Essaouira. Essaouira’s two Jewish cemeteries are open to visitors by calling the number of the guardian posted on the door. The older of the two is only separated from the sea by a wall and is regularly inundated. It features the mausoleum of Rabbi Haim Pinto (1748–1845), which is the subject of a hilloula (pilgrimage) every Fall. The graves are often laid on top of each other and the inscriptions are no longer legible. All that remains are circular or triangular symbols indicating whether the occupant was male or female.

The ‘new’ Jewish cemetery, across the street, was opened in the 18th century to accommodate the growing population. It is the final resting place of a number of rabbis, intellectuals and musicians as well as many of the ‘ordinary’ residents of Essaouira-Mogador. The cemetery tells the stories of many great families of Mogador such as the Corcos, the most famous of the original ‘Sultan’s merchants’ and the Yuly and Levy families – some of whom are certainly ancestors of the first Jewish US senator, David Levy Yulee.

The guardian of the cemeteries can also grant access to the Haim Pinto synagogue, just back inside the medina at Bab Doukkala, in the Mellah. The neighborhood is part of an urban clearance program and the synagogue, although thoroughly renovated inside, sits in a precarious position surrounded by crumbling and decaying buildings, the former homes of Jewish families. 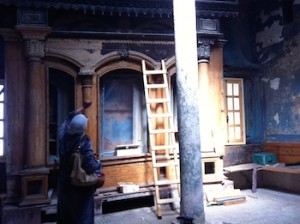 Just a few doors along, back towards the central medina, is Slat Lkahal, a community synagogue currently under painstaking renovation by Haim Bitton, helped by the generous donations of members of former Mogador Jews. Those who are lucky to meet him there will learn of the intricate connections between Jewish communities in Manchester, London, Italy and Mogador. So far, he has managed to rescue key elements of the original synagogue from demolition and is carefully restoring them using local artisans. He hopes to turn rooms on the upper floor into exhibition and meeting spaces.

Back in the Kasbah, the Simon Attia synagogue is the subject of an ambitious restoration program. Once also the Rabbinical Court of Mogador, the aim is to restore the space used for worship on the ground floor and create a library of documents related to Moroccan Judaism alongside accommodation for students of these works upstairs.

Most of Essaouira’s synagogues are long gone. Few have actually been demolished, but most have passed into alternative uses and only the older members of the Mogador Jewish diaspora recall their location. There are still plenty of clues to the size of the former Jewish population of Essaouira, however. A wander around the labyrinthine alleyways of the Mellah or Kasbah will reveal several doorways with the Star of David on the lintel and a conversation with any of Essaouira’s older residents will reveal the proximity and goodwill of the Muslim and Jewish communities in times gone by.