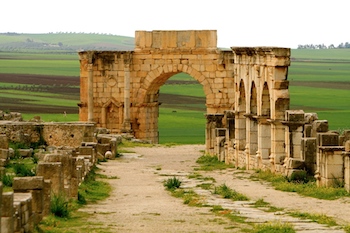 Streams of light illuminate the elaborate the Romain ruins of Volubilis accentuating each crevice line and jagged edge with a stream of shadows. As the sun sets the ivory Corinthian columns slowly fade from sepia tones to midnight black silhouettes. On a crisp day in Volubilis tourists snap a series of photos to capture the site’s magnificence. The ruins and mosaics of Volubilis harbor a rich and compleix. Archaeological traces in Voubilis have determined that the Romans occupied the area during the 3rd century BC and established a city of nearly 200,000 people. During this time the city served as the heart of Roman administration. It was an active part of Roman, North Africa producing grains and olive oil exports in the surrounding fertile regions which contributed to its immense prosperity. 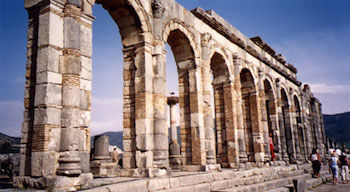 Volubilis is easily accessible as a day trip from both Meknes and from Fes and a must see historic destination on a Tailor Made Morocco Tour. This area among other nationally recognized attractions in Morocco is part of the UNESCO World Heritage Site. Voubilis is an archaeological thrill for those passionate about exploring some of the best preserved Roman remains in the world. 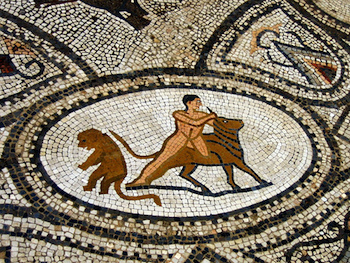 The dusty roads leading to Voubilis, also referred to as Walili, weave through the winding countryside. The ruins are deep within the gentle rolling hills and flush mountain terrain. The site covers around 800 by 600 metres. Surrounding the ancient remains is a garden of wild plants, and the sound of roaring waters from nearby streams invoke a feeling of serenity. Standing from a distance travelers can look onto the horizon towards the vibrant blue skies and see the elegant temple remains, pillars and the dominant Triumphal arch.

Having survived a few massive earthquakes throughout ancient times, there remain over 30 well-preserved mosaics revealing scenes of ancient Roman culture and mythological creatures.

For more information about the Roman ruins of Voubilis.