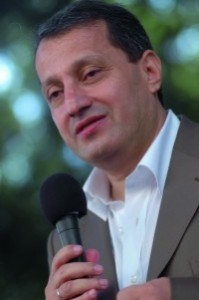 Maria Bethânia ‐ Brazil Romances and spiritual songs / Canticos, preces e suplicas. A native of Bahia, Maria Bethânia was the spokesperson of a youth movement involved in post‐dictatorship and feminism. Today, the adored grande dame of popular song – known as  Abelha‐rainha  (“Queen  Bee”)  –  plays  a  repertoire  of  homage  and  praise  to  the  Virginary, full of a sensual fervor related to Brazil’s multiculturalism. 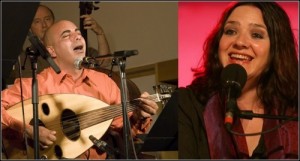 Nawah ‐ Morocco and Palestine Traditional Sephardic Jewish and Palestinian songs   Françoise Atlan, voice Moneim Adwan, voice and oud  Bijan Cheminani, zarb and daf . At  the  junction  of  the  three  monotheistic  traditions  of  medieval  Spain  and  a  musical tradition  evoking  exile,  lost  homelands  and  purified  love,  Françoise  Atlan  and  Moneim Adwan form a meeting between the musical history of the Maghreb and the Middle East.

The consciousness of a great voice. Following the path of the illustrious Feirouz to whom she is often compared, Julia Boutros  continues  with  intelligence  a  career  leading  her  to  be  respected  by  the  entire  Arab  world. Simple  in  her  interpretation,  serene  in  her  appearance,  Julia  Boutros  has  all  the attractions of a diva aware of the political realities surrounding her.

The ‘Kinor David’ choir under the direction of Michael Abittan ‐ Casablanca, Morocco. The art of matrouz. This  year,  in  the  spirit  of  the  spiritual  dialogue  that  characterizes  this  festival,  the  Jewish  Arabic tradition – dear to the musical heritage of Morocco – evokes the land of Andalusia,  a  crucible  of  Muslim,  Hebrew  and  Christian  cultures,  where  Jewish  and  Arab  poetry  are  embroidered and entwined.

Night in the Medina I

Dar Tazi – 8.30 pm Salah Aghili ‐ Iran The poetic art of Djalâl ad‐Dîn Rûmî. The  Persian  music  and  poetry  of  Djalâl  ad‐Dîn  Rûmî  opens  the  doors  of  perception,  lifting  our  imagination  into  the  heart  of  ancient  warriors  and  epic  songs,  before  descending  into  deep nostalgia and mystic sadness.

Prem Sanyas, “The Light of Asia” ‐ North India A masterpiece of silent film directed by Franz Osten (1925) and set to music on stage by the ‘Divana Ensemble’ ‐ manghaniyars and langas musicians from Rajasthan.  Prem  Sanyas  evokes  the  early  years  of  Buddha,  also  known  as  Siddhartha  Gautama,  the long‐awaited son of King Suddhodana. After growing up in a closed and protected world  the  young  man  escapes  the  palace  and  discovers  another  aspect  of  human  existence: poverty,  disease  and  death.  The  film,  shot  in  Jaipur,  is  an  opportunity  to  discover  the  sumptuous lives and traditions of the rajahs of the time.

Sacred song and lyre bèguèna Since the time of the Queen of Sheba and King Solomon (1000 BC), there were 3000 years of independence experienced by the Kingdom of Axum, before it became Abyssinia and Ethiopia. These countries then converted to Christianity in the 4th century at the same  time as the Roman Empire. The  crystalline  notes  of  the  lyre  and  singing  recitals  of  Alemu  Aga  take  us  back  to  the  chants  of  King  David.  At  once  meditative  and  therapeutic,  these  songs  are  ancient  and deeply peaceful.

Dar Tazi – 11.00 pm Sheikh Taha ‐ Upper Egypt The Inshad sufiya of Luxor The  Munshiddin  of  Upper  Egypt  are  known  for  their  poetic  verve  and  stage  presence.  Very  popular,  they  are  accompanied  by  the  Takht  Ensemble  who  play  melodic  ancient tunes  inspired  by  old  songs  such  as  Oum  Kalthoum.  Their  Sufi  singing  ‐  inshad  Sufiya  ‐  is  bright and accessible to all. 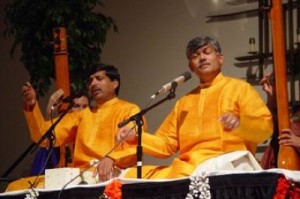 The sacred art of dhrupad. Dhrupad singing is the oldest classical music tradition alive in the Indian subcontinent. It is  rooted  in  the  recitation  of  the  Vedic  hymns.  Originally  sung  in  the  temples,  the  vocal  technique recreates the exaltation of the loving soul.

Dar Mokri – 8.00 pm Mohamed Amin El Akrami and his orchestra ‐ Morocco Andalusian tradition of Tetouan. Mohamed  Amine  Akrami  carries  with  him  the  musical  heritage  of  Andalusian  Tetouan,  a  small town in the Rif Mountains often called “the Andalusian patio of Morocco”. The tune  contains  both  sophisticated  and  bitter  aspects  and  the  music  al‐âla  of  Tetouan  is  beautifully  enhanced  by  the  Mohamed  Amine  Akrami  Ensemble.  Mohamed  Amine Akrami  perfected  his  art  with  religious  songs  from  madih  to  samâ,  studying  under  great masters such as Mohamed Larbi Temsamani and Abdessadak Chekara.

Jessica Bogado and Laura Delogu, sopranos. Samples of Peruvian Codes from the Andean area in the 18th century Halfway between the European Baroque universe and traditional music, the viewpoints of two civilizations meet in sacred music. These works, born of the “meeting of two worlds”,  make  Latin  America  the  chosen  land  of  a  musical  art  that  has  developed  in  staggering proportions  since  the  late  16th  and  17th  centuries.  The  young  musicians  from  Paraguay  ‘Barroco’  tell  the  story  of  this  journey  by  blending  indigenous  and  European  instruments, from the harpsichord to the Paraguayan harp. 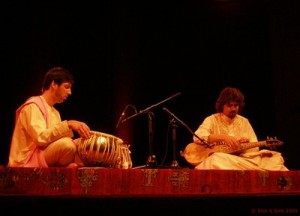 Afghanistan, formerly at the crossroads of the Persian, Indian and Asian civilizations, remains a country of proud mountain warriors, who are today faced with the game of international powers. Homayoun Sakhi, a musical revelation in recent years, has devoted his existence to rubâb,  an Afghan lute, which sounds volatile and cutting.

“The Conference of the Birds” by Farid Eddin Attar Jean‐Claude Carrière and Nahal Tajaddod revive the Sufi tale of Farid Eddin Attar during areading punctuated by music. All  the  birds,  known  and  unknown,  met  one  day  and  discovered  that  they  lacked  a  king.  They  decided  to  go  in  search  of  the  bird‐king  Simorg,  a  symbol  of  Truth  in  the  Persiamystical  tradition.  This  famous  story  of  initiation,  interspersed  with  stories  and  anecdotes,  remains  forever  a  jewel  of  Muslim  spirituality.  The  great  Rumi,  Persian  mystic  and poet, said of its author, Attar (c. 1140 ‐ c. 1230): “He was the soul of Sufism, I am only following his trail.”

Dar Tazi –  11.00 pm Divana ‐ Rajasthan, North India Sufi songs of the Thar Deser A  raw  voice  capable  of  shaping  a  myriad  of  songs,  in  perfect  harmony  with  the  amanchiya  and  sarangui  fiddles,  is  the  image  of  these  nomadic  societies  that  cultivate  ahigh poetic refinement. In the poetic paradise that is the ancient land of Rajas (Rajasthan,meaning  ‘Land  of  Princes’  in  Sanskrit),  the  poet’s  voice  rises,  sinuous  and  warm,  and  illuminates our soul like “the expanse of stars in the night”. 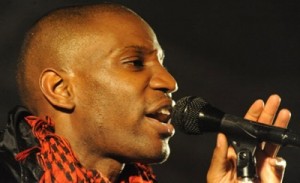 Urban Phileas – Reunion Island, France Reunion  Island  is  a  microcosm  of  intersecting  African,  Asian,  Indian,  Arab  and  Europeanpopulations,  a  symbol  of  multiculturalism  where  all  faiths  and  communities  live  together.The  spirit  of  this  special  island  is  expressed  through  maloya,  between  Dravidian  India,Malagasy  possession  rituals  (servis  kabaré)  and  the  legacies  of  African  slavery.  UrbanPhileas,  belonging  to  the  family  Lele,  practices  this  ritual,  which  has  been  passed  downthrough generations of ancestors.

Bab Al Makina – 8.30 pm Abd Al Malik ‐ France Rapper,  slammer  and  composer,  Abd  Al  Malik  is  the  media  figure  of  a  new  culture  that has  built  itself  out  of  the  search  for  another  life,  another  language,  while  managing  the  ups and downs of existence in an urban jungle. Abd Al Malik is inspired by, amongst other ideas,  the  Sufi  philosophy  of  spiritual  and  intellectual  resources  and  the  great  texts  of Western thought.

Bab Al Makina – 8.30 pm Youssou N’Dour and the Super Star of Dakar ‐ Senegal Tribute to Sheikh Sidi Ahmed al‐Tijani Youssou N’dour, a true icon of West African music, has not forgotten his spiritual roots. In front  of  the  symbolic  door  of  Fez  he  will  pay  tribute  to  the  great  master  of  the Brotherhood  Tijaniyya,  founded  around  1780  by  Ahmad  al‐Tijani.  Ahmad  al‐Tijani’s mausoleum  ‐  a  place  of  pilgrimage  for  the  worldwide  Tijani  brotherhood  ‐  is  in  Blida,  in the heart of Fez Medina. 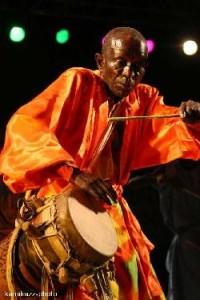 Creation Doudou Ndiaye Rose and his sabar drum ensemble With the choir of St Joseph Medina led by Ambouras ‐ Senegal The  sabar  drums  of  Doudou  Ndiaye  Rose  and  his  sons,  give  a  new  dimension  to  this polyrhythmic percussion and chorus, which is animated by the spiritual conviction to own the  soul  of  Africa.  This  also  occurs  when  Muslim  and  Christian  traditions  are  absorbed  by the traditional culture of the Fefer community.

Bab Al Makina – 8.30 pm Farid Ayyaz & Party and the great voices of moroccan samâ, accompanied by the Arab‐ Andalusian Orchestra of Fez, led by Mohammed Briouel ‐ Pakistan and Morocco The expression qaûl in Sufi speech, becomes qawwalî in Indo‐Pakistani music and meets the Arab‐Andalusian al‐âla tradition from Fes and the vocal art of samâ. In  a  common  spirit  of  poetic  recitation,  with  the  same  rhythmic  frenzy  and  equal  wealth of  ornamentation,  the  powerful  vocals  of  qawwalî  by  Farid  Ayyaz  intersect  with  those  of samâ and their voices fill the sky with chanting.

Syubbanul Akhyar Esemble ‐ Java, Indonesia Songs and music Hajir Marawi of Cirebon The first centuries of Islamization in Southeast Asia coincided with the heyday of medieval Sufism and developed around the 12th and 13th centuries, during which time the Sufi brotherhood tarîqat emerged. In Indonesia, Yemeni Arab traders from the Hadramout Valley were among the first to transmit a true and popular Sufism. The  musical  style  hajir  marawis,  legacy  of  the  Yemeni  Sufi  culture,  refers  to  a  set  of  hajir percussion  drums  (double  membrane)  and  marawis  (small  tambourines)  to  which  are added the oud, lute and Yemeni gambus.

Bab Al Makina – 8.30 pm Kazem El Saher and Asma Lmnawar, with the artistic collaboration of Aziz Lachhab ‐ Iraq and Morocco Kazem  El  Saher,  a  prestigious  and  big‐hearted  Arabic  singer,  will  be  in  Fez  alongside  the singer  Asma  Lmnawar  from  Casablanca,  with  whom  he  recently  collaborated  to  create  a masterpiece.  This  largely  spiritual  concert  is  being  shown  for  the  first  time  in  a  repertoire especially created for, and dedicated to, Fez.

Ben Harper ‐ USA Ben Harper expresses the roots of an America that, through its nomadic troubadours and minstrels, has brought the essence of spirituality from memories of a lost Arica, through the struggles of slavery and the hopes of the early settlers.

Conference of the Birds – “The  problems  we  face  cannot  be  solved  with  the  same  level  of  thinking  we  used  when we created them.” Albert Einstein Since  the  fall  of  the  Berlin  Wall,  surely  we  agree  that  the  world’s  fate  no  longer  depends on  a  balance  of  power  that  sees  mounting  tensions  between  a  western  culture dominated  by  reason,  creativity,  and  technology  and  other  cultures  driven  by  new, irrational, and dogmatic ideologies that draw solely on identity or religious affiliation? Not  to  deny  these  tensions,  we  must  understand  that  what  is  happening  is  far  more complex and deeply rooted. Whether  our  resources  draw  on  ancient  or  new  philosophies,  from  the  North  or  South, East  or  West  is  not  what  matters.  What  is  essential  is  that,  by  virtue  of  their  encounter, they  can  nourish  our  relationship  with  the  world.  The  impact  of  this  encounter  makes possible the emergence not simply of a plethora of ideas ‐ regardless of cultural relativis  but  a  genuinely  unknown  relationship  among  cultures;  a  genuine  diversity  tha challenges  and  enriches  thought,  concepts  of  society,  and  our  ideas  of  who  we  are  and can be. Thus the Persian mystic poet of the 13th century, Attar, in his The Conference of the Birds, recounted  how  the  birds,  through  an  intensive  dialogue,  were  able  to  discover  the  true significance of their existence and of their common destiny.