Tourist Attractions in Rabat Morocco, What to see and do in Rabat, Your Morocco Travel Guide 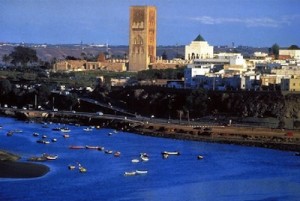 Rabat is located on the Atlantic Ocean at the mouth of the Bou Regreg River. On the facing shore of the river lies Sale, Rabat’s bedroom comunity. Tourism and the presence of all foreign embassies in Morocco serve to make Rabat the second most important city in the country after the larger and more economically significant Casablanca. There are a variety of historic tourist attractions in Rabat such as kasbahs, beautiful domes, minarets, wide avenues and green spaces which make for a fascinating half-day or full day Rabat tour.

Tourist Attractions in Rabat Morocco, What to See & Do:

Bab Oudia
Bab Oudia is the principal gateway to the Kasbah and one of the most striking sites in Rabat. Bab Oudia is considered one of the most beautiful Moorish monuments. The gate was built by the Almohad Sultan, Yacoub al Mansour, in 1195. Its purpose was more ceremonial than defensive, designed for a grand entrance into the Kasbah and its souks and the nearby Sultan palace. It is striking for its harmony and the sheer simplicity and beauty of its decoration. The basic feature is the arch, composed of three different designs: the basic horseshoe, a check-and-shoulder design and finally a band of geometric ornamentation.

Kasbah Des Oudaias
Kasbah Des Oudaias has been the citadel of the Alhmohads, Merinids and Andalusians in Rabat.  You can visit the Kasbah Mosque, the oldest mosque in the city, built in 1050 and subsequently rebuilt in the 18th century. Below is a seventeenth-century semaphore station called the platforme. Several forts are built below and around the platforme to protect the town from corsair fleets.

The Palace Museum & Andalusian Gardens
The Palace Museum is a seventeenth-century Almohad Palace, now housing the museum of Moroccan Art & Culture.  The Palace was built in the seventeenth-century by Moulay Ismail, the first Almohad sultan to unify the country. Today, it showcases interesting exhibits of Moroccan art and culture. A vast central patio gives access to private quarters and reception rooms containing the exhibits. There is a hall containing oriental rugs made in Rabat, an exhibition hall for musical instruments and a salon reserved for customs and rituals.

The Andalusian Gardens in Rabat is a beautiful French- constructed garden occupying the old Palace grounds in Kasbah Ouadia. True to Andalusian traditions with its flowering annuals and beds of shrubs these gardens make for a lovely afternoon walk in any Morocco travel season. The gardens were constructed by the French in the twentieth-century and are a delightful shady retreat, with a profusion of daturas, oleanders, orange, lemon and banana trees. 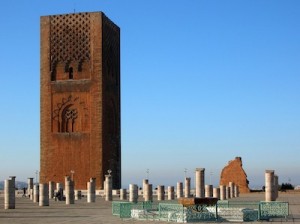 The Hassan Mosque & Hassan Tower
The Hassan Mosque is Rabat’s most famous landmark and of of the most ambitious of all the Alhmoad architectural sites. Sultan Yacoub al Mansour begun construction of this enormous minaret in 1195, with the intention of reaching 60 meters marking the highest in the Muslim World. This ambitious mosque was abandoned when al Mansour died with the minaret, still standing today, at 40 meters. The adjacent mosque was destroyed by an earthquake and only a few re-erected pillars stand today. Some of the pillars that are the most magnificent are Roman ruins that were moved from the area of Volubilis to the exterior of the mosque. The minaret is a majestic sight that dominates every view of the capital.

Mohammed V Mausoleum
Mohammed V Mausolem: A modern monument built in traditional Moroccan style where both father and grandfather of the present King of Morocco are buried. Built after Moroccan independence, this is one of the most prestigious modern monuments in Morocco that was created in traditional Moroccan style. The mausoleum is richly decorated with elaborate zellij mosaics and spiralling designs. Non-Muslim visitors are allowed to visit the mausoleum and see the tomb of Mohammed V, carved in white onyx, from a gallery above.

Almohad Walls
Bab Rouah is an Almohad wall that runs all the way from the Kasbah Oudia to the Royal Palace in Rabat. Monumental in size and harmonious in both its design and or facing the Hassan Tower. Inside, the gate has three domed chambers used as a defensive structure. Exhibitions are held there and are open to the public. 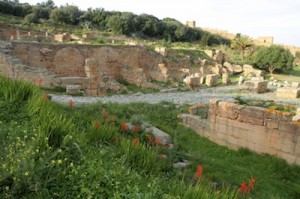 Archaeological Museum
The most important in Morocco, tracing back to the history of the country from the bronze age. Here a portrait head of Juba II, Berber King of Numidia is displayed. The Archaeological Museum in Rabat is the most important archaeological museum in Morocco. The museum gives a fascinating account of the rich Moroccan history dating back 35,000 years to the Stone Age. The highlight of the collections is a Roman-era bronzers called the Salle des Bronzes. It displays ceramics and artefacts mainly from Volubilis (near Meknes) and a few pieces from Chellah and Lixus. Do not miss the portrait heads of Cato the Younger and Juba II – Berber king of Numidia.

For more information about an Rabat Tour