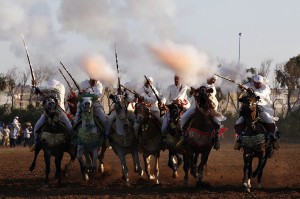 During the year, the small town of Tissa,on the edge of the Rif region, in the province of Taounate, is a quiet rural community, tucked away in the hills of the Moroccan countryside, fifty kilometers away from Fez. From 8-13 October 2013, the town will be transformed, as it is each year, in to one of the premier horse festivals in Morocco.

The culture and tradition of horses and horsemanship is deeply rooted and widespread in Morocco. The Fantasia or Tborida are contested by competing teams dressed in colorful traditional gandouras and djellabas, charging the full length a field only pulling up at the last minute whilst firing their djezail flintlocks with a thunderous explosion. The Tborida teams led by a ma’alem, or teacher,form up Into a single line and at the signal begin the charge. In the closing stages they must rotate their djezails with one arm at full gallop before pulling up and firing.

They are assessed by the judges for horsemanship, maintaining their line during the charge and successfully pulling up at the end. The horses are trained to do this, but even so, riding at full gallop with the reins in one hand and the djezail in the other is an impressive feat of horsemanship. Very rarely a horse may run on after the halt. To stand in front of the charge even though it is behind a barrier is to sense something of the fear these riders inspired in the enemy. The firing of the djezails is very loud and the smoke billows in the air,along with the occasional wad from one of the djezails dropping to earth.

The French Romantic painte, Eugène Delacroix, immortalized the Moroccan tribal horseman riding into battle following his first visit to North Africa in the 1830’s and the son of the Pasha of Marrakech, Hassan El Glaoui, famous for his paintings of Moroccan riders and horses once remarked that his father who died in 1956, went to war on horseback.

The large tent city erected for the festival also provides traditional music and dancing as well as displaying artifacts, ceramics and jewelry and providing food and drink. The festival is an important event for the local economy and has been held in Tissa since medieval times. It coincides with the mouassem of a local saint, Sidi Muhammad ben Lahcen who lived in the 15th century.

Like all good horse shows the different breeds of horses are the subject of close attention; pure bred Arabian stallions, Barbary mares and Arab-Berber horses are bought and sold. To bring the Horse Festival of Tissa to a close, there is a huge parade in the stadium. The international horse show at El Jadida under the patronage of King Mohammed VI has done much to reintroduce the Barb horse , which has great strength and endurance , back into international breeding circles.

Tissa has a great reputation as a horse show with a fair, sometimes a circus, a huge bazaar, and finally the official folklore of the region “Hayti”. It is visited by 4,000 spectators each year and is a great opportunity to enjoy an important regional event and mix with the locals and Moroccans who have brought their horses from all over the country. Moroccans living abroad in France, Spain and Italy also participate in festivals such as Tissa.
Tissa was garrisoned by the French during the protectorate because it was on the way to Fes and has an upper Tissa on the hill with a church and other buildings and lower Tissa lies at the bottom of the hill.