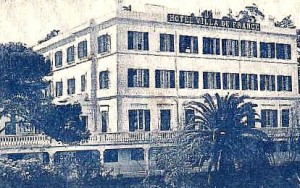 The Moroccan port city of Tangiers (also known as Tangier, or Tanger in French) sits on the Straits of Gibraltar, staring right across the Mediterranean Sea at Spain. Sitting just east of Africa’s most north-westerly point, it has been a key point of exchange between the African and European continents for centuries.

Between 1923 and 1956 (when Morocco gained independence), Tangiers was at the center of a 144 sq mile international zone under the joint administration of France, Spain, and Britain (and later Portugal, Italy, Belgium, the Netherlands, Sweden, and the United States). This international status and the post-war wanderlust of many European and American travelers resulted in a large and diverse expat population of writers, artists, smugglers, bon vivants and fortune-seekers living alongside Tangier’s indigenous populations of Moroccan Arabs, Berbers and Riffians from the neighboring Rif mountain range. Foreign residents included Beat Era American authors, Paul Bowles, Jack Kerouac and Allen Ginsberg.

However, even before the establishment of the French Protectorate in Morocco and the Tangiers International Zone, the seafront frontier town atmosphere of Tangiers attracted its fair share of celebrity residents. One such visitor was French fauvist painter, Henri Matisse. 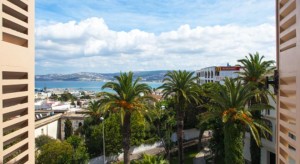 Matisse’s 1912 work, Window at Tangier, is a painting of the view from his window in room 35 at the Hotel Villa de France. Originally built in 1880 by Luciano Bruseaud, the Villa de France was the residence of the head of French diplomacy before becoming the main building of the hotel. It featured impressive gardens stretching to Tangiers’ Anglican church of Saint Andrew. The hotel became the favorite of an élite clique of international visitors during the period of the International Zone: French and British aristocrats, German diplomats, military officers and even clergymen are said to have stayed there for a drink or a few nights. The Villa de France only lost its pre-eminent position when Scottish businessman Lord Bute opened a larger and more sumptuous rival in 1930: the Hôtel El Minzah. The decline of Villa de France began after the end of World War II and the dissolution of the International Zone, and by the late 20th century it had long become outmoded and was in desperate need of renovation. The hotel was closed in 1992 and remained shut for more than 20 years.

Protests against the threat of demolition in favor of modern property development are said to have reached the ears of King Mohammed VI. Villa de France was finally classified as a historic monument in 2003, befitting its grand architecture and function as the urban memory of Tangier. The renovation and expansion began 3 years later to the tune of around 100 million Moroccan dirhams (US$ 10.5 million). 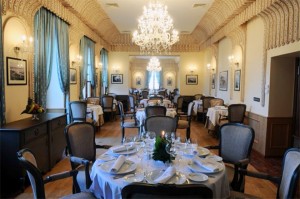 The Grand Hotel Villa de France was officially re-opened in September 2014, after a soft launch over the preceding summer. Along with its erstwhile rival, El Minzah, it is now owned by Iraqi-born British businessman, Nadhmi Auchi. The aim of the renovation has been to maintain the character of the original architecture, while acknowledging Tangier’s pinnacle of the 1950s and 60s, in a modern 5* hotel setting. Room 35 has been reserved as an homage to Matisse. The renovation is sympathetic to the original charm of the 19th century design, while incorporating traditional Moroccan craftsmanship and modern amenities (such as independent apartments and a new pool).

Today, as in yesteryear, the new Grand Hotel Villa de France enjoys unfettered and impressive views of both the Tangiers medina, the Mediterranean and its own extensive gardens. Sitting on a hill above the city, it is the perfect escape from the bustle below – either for a drink on the beautiful terraces, or for a longer stay.