The Mosques of Marrakech, Your Morocco Tour Guide 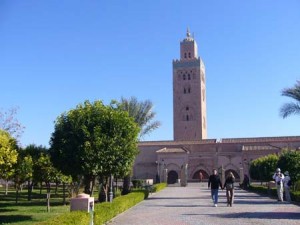 The famous Koutoubia Mosque dominates the skyline of Marrakech. Koutoubia Mosque is 77 meters high, including it’s majestic minaret, and was built in 1158 by the Almohad Caliph Abd al-Mu’min (1094–1163) then completed by his grandson the Almoravid Sultan Yacoub El Mansour in 1195. Caliph Abd al-Mu’min also built the Giralda Tower in Seville and the Hassan Tower in Rabat which was never completed. The towering square Koutoubia minaret in Marrakech is all the more striking because the limestone walls remain undecorated by modern restorers.

At the time the area around Koutoubia was the centre of the old city and the Almohads had built a palace there which was later destroyed but you can still see the foundations. The courtyard of the mosque in Marrakech originally housed booksellers and scribes who could write documents, hence the Arabic name kutubiyyin gave its name to the Koutoubia or book seller’s mosque.

The call to prayer rings out from the Koutoubia minaret and is echoed by all the mosques in Marrakech which is a wonderful sound particularly in the early morning. The Malakite rite in Morocco permits the call to prayer to be sung and depending on the muezzin who conducts the call to prayer, it can be very beautiful. Moroccans, as with all muslims, pray five times a day and their religion rules their daily lives. Whilst a non believer cannot enter the mosque, the exterior view of Koutoubia both from a distance (it can be seen from 29 kms) and close up is a stunning sight and is Marrakech’s icon. It is floodlit at night.

The Mouassine mosque on Rue Mouassine is just up from the Dar El Bacha Palace. It is a large and imposing building with a hammam , a medersa and a large fountain in a square to the left of the mosque. It was built by the Saadian Sultan Abdullah el Ghalib in 1560.The Bab Doukala mosque was also built by the Saadians in 1557 who built also built several other mosques including the Barrima mosque, the Zaouia of Sidi Bel Abbes, the Zaouia of Sidi Ben Slimane al-Jazouli, Zaouia of Sidi Youssef Ben Ali, and the Sidi Moulay el Ksour mosque. 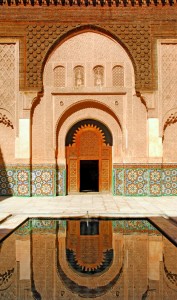 The Ben Youssef Mosque is on the main square close to the Marrakech Museum and the Medersa Ben Youssef was originally built by the Almoravid ruler Youssef Bin Tachfine in 1070 and his son Ali Ben Youssef built the largest mosque in the city on the site to be the center of the new city after the conquest by the Almohads . It was built between 1121 and 1132 and was said to have cost a fortune to build with a huge fountain in the central courtyard. It was refurbished by the Saadian Sultan Abdallah al Ghalib and the Saadians also built the magnificent Medersa Ben Youssef between 1563-1564, which tourists can enter . You can also see the Koubba Ba’adiyn with its superb carvings in its dome which was part of the orginal mosque. It is in the park facing the mosque and you can buy a ticket for it in the Medersa Ben Youssef.

The Ben Youssef Mosque underwent a further architectural transformation in the 19th Century by the Alaouite Sultan Suleiman who restored the mosque which had fallen into ruin in the 17th and 18th Centuries but all traces of the Almohad and Almoravid interiors were lost. Mosques in Marrakech have undergone a continuous process of recreation along with the Medina. The situation only stabilised during the French Protectorate and subsequent post independence restoration efforts.

Today the Ben Youssef Mosque dominates the square with its imposing walls and if you are lucky you may be able to see inside through its large door. In the alleyways of the Medina you can glance through open door ways and sometimes catch a glimpse of the interiors, many are plain white with arches .Sometimes there is raffia matting around the walls and carpets laid on the floor. On Fridays it is worth watching the prayers and sermons of the imam on the 2M TV channel in Morocco’s finest mosques to see some of the interiors.

The Ben Saleh Mosque is in a square at the end of Derb Dabachi. It is remarkable as being the sole example of Merinid architecture in Marrakech .It is currently been refurbished. Behind the mosque is the Medersa Ben Saleh which was built n 1671 by Sultan Moulay Rachid and has been completely restored having been a ruin for many years.

There are hundreds of mosques in Marrakech both ancient and modern and new mosques continue to be built many with the financial support of the Kingdom of Saudi Arabia.