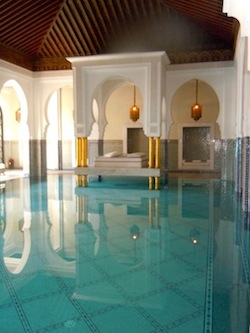 La Mamounia is Marrakech’s most iconic hotel. Every square foot La Mamounia is infused with traditional Moroccan design mixed with a modern French modern glamour. Care of Parisian designer, Jacque Garcia, Marrakech’s La Mamounia and its opulent spa boasts an atmosphere rarely seen out site of the “grande dame” hotels in Paris. La Mamounia Spa is located in a lavish 27,000 square ft underground complex that ranks among the worlds best.

Visitors to La Mamounia’s Spa in Marrakech will be impressed by the spa’s appeal of traditional treatments. La Mamounia’s Spa has interconnecting rooms that open out into sensual spaces where guests can have a luxurious experience. Morocco’s La Mamounia Spa is deliciously decorated from ceiling to floor with a majorelle blue color palette. The walls and floor are delicately lined with Moroccan tiles and oversized Moroccan glass lamps. 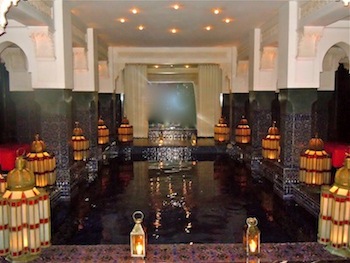 Guests at La Mamounia Spa can choose from treatments that include being pampered at their Royal Hammam. A Royal Hammam treatment at La Mamounia’s Spa begins with the traditional black soap grommage, made from pressed olives and salt, then an intense scrubbing followed by a soothing mud body mask. After down time in one of La Mamounia’s relaxation rooms, there is another treatment that follows which is a moisturizing Tadelakt massage, using an argan balm that is comprised of amber, honey and rose water dream.

A treatment at La Mamounia’s Spa is not complete without a visit to their  private gardens, which spans 20 acres and boasts 100 year-old olive, palm and fruit trees, roses, bougainvillea, geraniums and other species. The fragrance of fresh orange blossoms will permeate your entire essence, as there is nothing quite like a day at La Mamounia’s Spa. 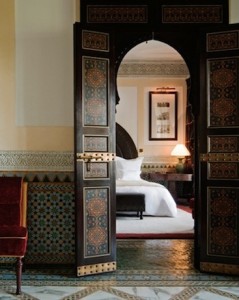 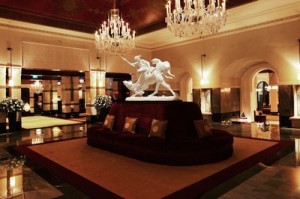 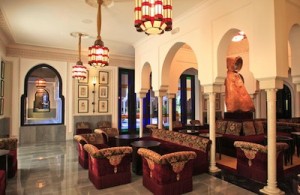 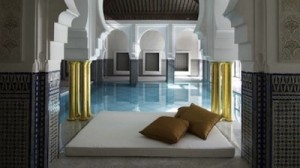