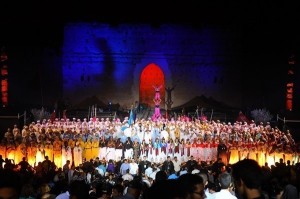 Held under the High Patronage of His Majesty King Mohammed VI, the National Festival of Popular Arts  is the French acronym in Marrakech is the oldest festival in Morocco. Held annually in Marrakech, Morocco it showcases folk arts of the kingdom through its music, art and local handicrafts.
It is famous as a joyful celebration of the ancient traditions of tribal dancing and music and poetry of the Berber tribes. The center piece is the thrilling spectacle of the evening performance in the huge floodlit grounds of the ancient Badii Palace in the Medina of Marrakech. Tickets are sold at the Theatre Royal on Avenue Mohammed VI for each evening’s performance. As this year’s Festival is being held for the first time in Ramadan, the evening performances which evade the heat of the day are especially welcoming. The brilliantly choreographed performances succeed each other as each team of male and female dancers, drummers and musicians dressed in beautiful tribal costumes, each led by a Maalem or troupe leader, appear from different parts of the stage to give their performances. The language used to introduce the performances is Amazigh, the Berber language, which adds to the thrill of this unique event. If you are in Marrakech, it is a must see annual occasion. 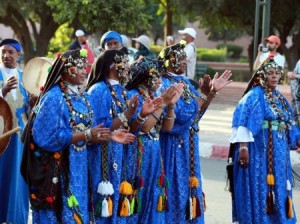 On the first evening prior to the performance the troupes parade in their finery from the edge of the Guéliz, the modern part of town, starting at the fountain close to the Hotel Marrakech on Avenue Mohammed V to the Badii Palace in the medina. It is a spectacle not to be missed.
The teams train and compete each year to take part in the festival and the Maalems or troupe leaders , play a significant role as guardians of the traditions of dance and music. The troupes are selected by different regional competitions. This Festival plays a vital role in preserving the berber tribal heritage by keeping these traditions alive. You can see the 16mm films transferred to video of the Berber tribal dances taken in the Atlas Mountains in 1957 by Daniel Chicault the French explorer. They are on permanent display at La Maison de la Photographie.
(http://www.maisondelaphotographie.ma) which is close to the Medersa Ben Youssef in the Medina. (46, Rue souk Ahal Fès ,200 m behind Ben Youssef Medersa). You can also visit the Berber Ecomuseum at Ourika which has historic still photos of the Berber tribes along with original carpets and Berber jewelry. The museum is part of the Maison de la Photographie which has been run since 2009 by Patrick Mana’ch and Hamid Mergani.
The festival foundation team have also introduced the concept of a festival village incorporating different musical performances, music workshops, exhibitions of handicrafts, regional products, conferences and films devoted to Moroccan heritage. FNAP has recently joined the European Forum of music festivals in the world. Founded in 1991, this network is the largest dedicated to world music. It has festivals in twenty countries and attracts more than three million visitors.