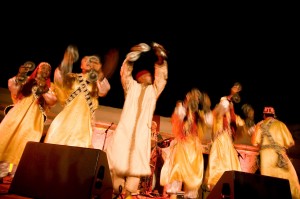 On Marrakech’s Djemaa El Fna Square amongst the orange juice stalls and story tellers you will find stalls with CD’s testifying to the popularity and importance of Morocco’s contemporary music scene which began with the accession of King Mohammed VI in 1999 when greater liberalization of musical genre especially for young people who sought music which reflected their aspirations was gradually phased in and supported with musical festivals organized with royal support and sponsorship like the annual Mazawine Music Festival in Rabat, The Gnawa Festival in Essaouria and the World Sacred Music Festival in Fez. Moroccan TV and radio channels also play an important role with live performances. The Moroccan contemporary music scene and its festivals have successfully fused elements of its ancient Berber musical traditions with modern music such as Chaabi, Hiphop and Rai and Rap.

Traditional Berber folk village music called Ahwash, is very much alive and is on display in July each year at the National Festival of Popular Arts at the Badii Palace in Marrakech. The music performed by professional musicians called Raiss includes comedy and dances in their performances. 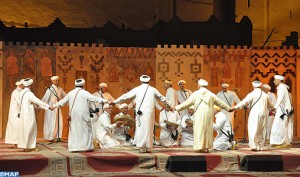 Two famous traditional musical bands are Bachir Attar’s Master Musicians of Jajouka who originally met with Brian Jones and the Rolling Stones in 1969 and recorded with them. Their music celebrates the pagan rites centered on the figure of Boujeloud who has been likened to Pan. They perform regular concerts in Morocco and abroad including the United States and Germany playing with international musicians. They recently featured in Anthony Bourdain’s “Parts Unknown “ program on CNN. The other traditional band is the Daqqa of Marrakech who perform a ritual dance for the religious festival of Ashura.

Andalusian classical music called Al Ala was brought to Morocco following the Reconquista in Spain when Muslims and Jews were forced to leave. It is an urban form of music which is highly popular and performed with large orchestras frequently on TV and radio. Jewish musicians had a profound influence on Al Ala.

Gnawa was brought to Morocco by Sub-Saharan Africans and later became part of the Moroccan tradition. Much of the modern fusion draws on Gnawa and the annual Essaouira Gnawa Festival is now broadening its musical performances to include a more contemporary repertoire.

Classical Malhum which translates as “gift” or “inspiration” is Arabic in origin and is derived from Sufi inspired Arabic Andalusian poetry.

Sufi Brotherhoods (tarikas) are widespread in Morocco, and music is an integral part of their spiritual tradition. The purpose is to induce a trance state which inspires mystical ecstasy. Leading Sufi Brotherhoods include the Derkoua, Hamadasha, Aissoua and the Jilala.

Modern music includes Rai which is associated with Algeria in the international music scene, but Morocco has produced its own stars lincluding Cheb Mimoun and Hanino. Other genre include Hiphop, Electronica and Fusion, which draws on Gnawa, Jazz and heavy metal. Casablanca is a major center for contemporary Moroccan music.

The Moroccan Music scene is vast and growing along with it’s new pop up festivals and summer venues.