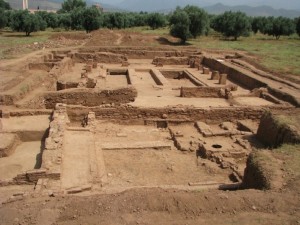 The Medieval  site  of Aghmat can be found beside the modern village of Ghmat which is 30 km south east of Marrakech in the northern foothills of the Atlas Mountains in Morocco. Professor Ron Messier, Professor Emeritus Middle Tenessee State University and Senior Lecturer in history at Vanderbilt University and his codirector Professor Abdallah Fili faculte des letters Universite d’El Jadida have been following a trail of gold a it was part of the camel caravan routes from sub-Saharan Africa through the ancient city of Sijilmassa which Ron Messier’s team excavated through to Morocco’s Medieval Capital, Aghmat. Coins minted in Sijilmassa have been  found in  an excavation in Jordan and Aghmat too minted coins for the Almoharavid empire which stretched into Spain.

The international archaeological program has been studying Aghmat Since June 2005 Medieval texts suggest  that Aghmat existed before advent of Islam in the 7th Century. It flourished under the Idrissids  in the 8th and 9th centuries and attained the rank of an Amazight city state in the late 10th Century. It became a capital under the Almoravid dynasty from 1056 to 1070 when the Almoravids moved their capital to Marrakech. Aghmat  gradually declined in competition to Marrakech. 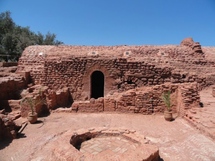 It was an important city for routes through the Atlas Mountains on the trans Saharan trade and attracted scholars from Ifriqiyya (Tunisia) and Andalusia. The site contains the tombs the Andalusian kings al-Mu’tamid ibn Abbad of Seville and Abdallah ibn Bulukhin of Granada. Zaynab Nafzawiyya settled in Aghmat married three successive rulers,the independent Maghrawa emir and the first two Almoravid emirs.

Aghmat consisted of two towns Aghmat Ourika and Aghmat Haylana home to Bani Masmuda tribesmen. It was a rich city fully irrigated and minting gold currency for  the Almoravids.

The archaeological excavations have  so far revealed a hammam , a palace and a mosque.the archaeological process of discovery is aided by modern equipment which can identify the ancient foundations which are now under ground. Ancient texts also describe the city providing valuable clues. The excavations have been conducted to ensure preservation as well as revealing what was buried beneath the surface. The hammam, the first structure to be excavated is remarkably well preserved and fragile areas have been supported whilst respecting the original integrity of the building and its original materials. When Aghmat declined and the hammam fell out of use it began a second life as a pottery and the excavation discovered the potter’s  wheel. The palace was a typical Andalusian palace of the 14th Century and at the end of the 2011 excavation  a separate level revealed occupation from the 9th -12th Century under the Almoravids when Aghmat was their capital. The mosque which was  definitively confirmed during the 2011 excavation was founded by Wattas ibn Kardus in 859AD. There were several phases to its construction. It was found to have a moveable minbar on wooden rails  the only other of its kind was found in the mosque at the ancient city of  Sijilmassa.The team also found an Islamic inscription from the Koran as they did in Sijilmassa. The inscription reads “God is the light of the heavens and the earth” 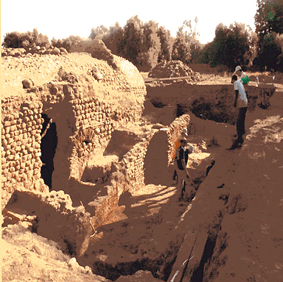 In April 2007 the Aghmat Foundation was founded by a group of patrons under the leadership of Moulay Abdellah Alaoui to provide financial support for further excavations and the construction of a museum for the artifacts that have been found and for conservation and preservations of the excavations.In 2009 a partnership agreement between the Aghmat Foundation and the Moroccan Ministryof Culture which delegates to the Foundation matters of managing archaeological research, conservation and protection of the excavated remains and  the opening of the site to the public.

It is easy to visit the site of Aghmat close to the village of Ghmat and the archeological work is a testimony to the close cooperation between the Moroccan Ministry Culture and The United States.

Excavation work continues each season and Professor Messier is working hard to achieve more sponsorship to support the continuing  discovery process,  which is more difficult since 2008  during the current economic downturn.

For more information about the Excavation at Aghmat, Marrakech Morocco or a Marrakech Tour