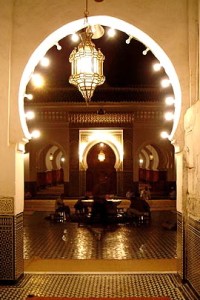 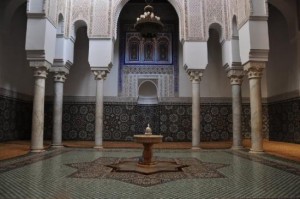 Wine production in Morocco is believed to have been introduced by Phoenician settlers, and was definitely established in the era of Ancient Rome. Large-scale wine production with extensive vineyards was introduced into Morocco by the French during the protectorate as it was in Algeria and Tunisia. Today’s regions in Morocco that have become famous for wine are Meknes, Casablanca and Essaouira.

At Morocco’s independence in 1956, there were 55,000 hectares (140,000 acres) of vineyards. Although much of the French wine expertise left when Morocco became independent, the wine trade continued to be significant into the 1960s Moroccan winwas used for blending with French wines until the European Community introduced  import quotas in 1967 which led to significant reductions in previous  wine exports. From 1973-1984, the vast majority of the vineyards were also taken over by the Moroccan state and wine production declined. In the 1990’s KingHassan II sought to revive investment from French wine growers principally from Bordeaux.

In the 1990s, during the rule of Hassan II, the Moroccan wine production started to improve due to foreign (primarily French) investment and know-how. This was achieved by offering foreign wine companies the possibility for long-term lease of vineyards from the state agricultural company SODEA. Several large Bordeaux-based wine companies, including Groupe Castel, William Pitters and Taillan, entered into such partnerships, which have been quite successful in reviving the Moroccan wine industry.

The traditional red grapes planted in Morocco are Carignan (which once dominated), Cinsaut (almost 40 per cent in 2005), Alicante, and Grenache. Plantations of Cabernet Sauvignon, Merlot and Syrah have increased rapidly, and together make up around 15 per cent. Traditional white grape varieties include Clairette and Muscat. There has also been smaller experimentations with Chardonnay, Chenin Blanc and Sauvignon Blanc.

Morocco sets itself apart from other countries in North Africa because of its potential for producing high quality wines due to its location. Benefiting from the cooling breeze from the Atlantic Ocean and nested at the bottom of the Atlas Mountains, Moroccan vineyards have been cultivated for more than 4,000 years.

When Morocco became a protectorate of France in 1912, the French found its fertile soil, especially in the Meknes region of the Middle Atlas Mountains, an ideal spot in which to build a formidable wine industry. Morocco is now producing high quality wines for export. The majority of wine exports go to France and other European destionations but the wine importing company Exotic Imports is beginning to make inroads into the American market, particularly Colorado.

Thalvin’s vineyards are located in Zenata, the coastal region of Morocco. Enhanced by the warm rays of the Moroccan sun, the constitution of its soil, the use of sustainable farming methods and the handpicking of the grapes. The resulting traditional winemaking approach has led to the creation of the best of Moroccan wines, and provide a diverse range of wines, each created with a stylistic approach, unique blends and settled notes. Retaining indigenous varietals such as Faranah, and introducing others such as Cabernet Sauvignon, Merlot, Syrah, Chardonnay and Sauvignon Blanc.

One of the best regions for making wine in Morocco is the Ouled Thaleb Estate, situated 20 miles northeast of Casablanca, which clearly demonstrates a similarity with the soil of Bordeaux and particularly, the Medoc region. The soil consists of sandy shale and gravel sand, and like the Medoc region, the estate is in close proximity to the sea. Located on the Ben-Slimane plateau, it faces the Atlantic Ocean and is swept by west winds which leave their maritime influence on the region.

Thalvin, in partnership with landowners in Rommani, a region of rolling hills situated at the base of the Atlas Mountains (at an altitude of 2000 feet), have planted vines where the black soil, its chalky clay subsoil and the emerging rock supply the very particular qualities desired for the making of quality wines. Grapes are hand picked and there is no use of herbicide or fungicide, so technically these grapes are grown organically. The wine industry in Morocco employs about 10,000 people and supplies about 40 million bottles of Moroccan wine per year.

Morocco is one of  the largest wine producers in the islamic world.The industry brings the state millions in sales and taxes Up till now the majority of wine sales have been in Morocco which is of course a muslim country and it’s no secret that many Moroccans enjoy wine as well as Morocco’s growing number of tourists. As an islamic party now leads the government and a stricter interpretation of islam is gaining ground the future for Moroccan wines may well be more directd towards export and the tourism industry inthe future.

The Celliers de Meknes owned by Mr Brahim Zniber now cultivates 2,100 hectares (5,189 acres) of vineyards, bottling anything from entry-level table wine to homemade champagne and even a high-end claret, Chateau Roslane, aged in a vaulted cellar packed with oak barrels imported from France. The winery now dwarfs virtually any other producer in Europe.Cradle of the Designation of Geographic Origin (AOG) the areas of Guerrouane, Beni M’tir  and of the Designation of Controlled Origin (AOC) area of “Les Coteaux De l’Atlas”, this region concentrates today more than 60% of the Moroccan wine production.  Les Celliers De Meknes is  in the heart of these vineyards.Les Celliers de Meknes has created the first Moroccan Chateau officially inaugurated in June 2004.

Wine tasting visits  can be arranged to the vineyards of  Chateau Roslane with Les Celliers Meknes.Chateau Roslan is in the only AOC region (AOC coteauxd’Atlas) in Morocco and creates wines of varying quality and price. The Chateau is immaculate, and has beautifully manicured gardens with traditional fountains. Chateau Roslan produces the premier “Cru” White and Red and other premium wines.

Volubilia is a small vineyard of 63 hectares, and wine tasting visits can also be arranged. It produces wines which are highly scored and probably the best in the area.

For More Information Wine Tour in Morocco and the Meknes Winery