Must See, Top Rated Places and Palace in Marrakech offers the perfect Insiders Guide to travelers who are visiting Morocco on a Private Tour. Don’t miss out on some of Marrakech’s Best places that range for Palaces to ancient Mosques. Known for it’s magnificent palaces and old world decor designed by the Moors with Andalusian flavor, Marrakech is a must on every travelers bucketlist.

Marrakech is home to several magnificent, must see Palaces located in the historic district, also referred to as the medina. When visiting Marrakech on a Private Tour to Morocco these Top Rated Palaces are historically significant and offer a window into the former lives of royalty who built and managed these century old lavish homes. The palaces of Marrakech are essentially riads (courtyard homes) based upon the concept of Roman villas with lush interior courtyards, ornate architecture, hand crafted cedar wood and painted ceilings and succulent gardens. Marrakech’s palaces are typically surrounded by walls given this was a tradition of protection and to prevent those passing by from seeing inside. Many of the Marrakech palaces and riads have been been transformed into boutique hotels and guest houses.

Several of the palaces such as the Bahia Palace, El Badi Palace, Dar Si Said Palace, are historic landmarks, that have remained open to the public as to visit on a Guided tour of Marrakech. These palaces are also used by art organizations such as the Marrakech Bienalle and the Marrakech International Film Festival for both public and private events. 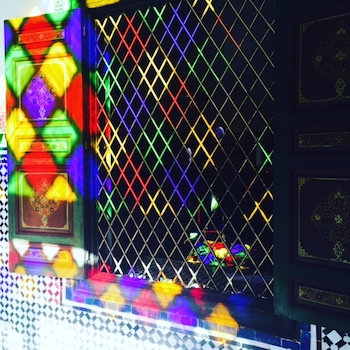 The Bahia Palace was built at the end of 19th century by Si Moussa, grand vizier to the sultan Sidi Mohammed ben Abderahmane 1859 -1873, as his personal residence. The work on the palace was continued by his son Ba Ahmed who was grand vizier to Sultan Moulay Hassan and the powerful regent to the young sultan, Abdel Aziz. They brought craftsmen from Fes who created carved and painted and guided wooden ceilings and reception rooms and numerous courtyards. The haphazard warren of rooms is partly due the growing number of official wives and concubines with their children. The most imposing feature is the vast courtyard used for official occasions and decorated with a central basin. It leads onto to gardens and palm trees. When Ba Ahmed died all his possessions were seized by the sultan and the palace is completely empty of fixtures and fittings. The Bahia has an imposing entrance through the main gate, which is just up from the Jewish Mellah. It was the headquarters of the French military during the French Protectorate and the American novelist Edith Wharton stayed there as a guest of Marshal Lyautey in 1917. The Royal family still uses the Bahia palace for official occasions. 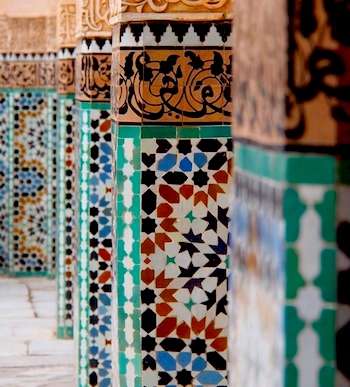 Visit the Ben Youssef Madrasa, an Islamic college in Marrakech, Morocco, named after the Almoravid sultan Ali ibn Yusuf (reigned 1106–1142), who expanded the city and its influence considerably. It is the largest Medrasa in all of Morocco.The college was founded during the period of the Marinid (14th century) by the Marinid sultan Abu al-Hassan and allied to the neighbouring Ben Youssef Mosque. The building of the madrasa was re-constructed by the Saadian Sultan Abdallah al-Ghalib (1557–1574). In 1565 the works ordered by Abdallah al-Ghalib were finished, as confirmed by the inscription in the prayer room. Closed down in 1960, the building was refurbished and reopened to the public as a historical site in 1982. 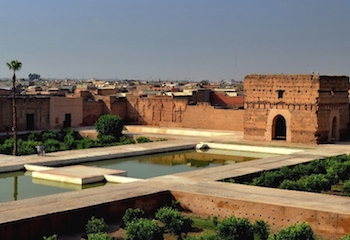 The El Badi Palace was built in the 16th century by the Saadian Sultan Ahmad al-Mansour following his victory over the Portuguese at the battle of the three Kings in 1578. This epoch making event changed the course of history as King Sebastian of Portugal and his allies were defeated and Portugal never again held sway in Morocco apart from a few costal outlets like El Jadida, Essaouira and Azemmour. The Sultanate of Morocco was at the pinnacle of its power. Portuguese ransoms and captured booty as well as Sub Saharan African gold and the sugar trade paid for the construction of the palace.
Sultan Ahmad al-Mansour died shortly after the El Badi’s completion in 1603. He had asked his court jester what he thought of his palace and the jester replied that it would make a fine ruin. By 1690 this came to pass, as Sultan Moulay Ismail stripped the El Badi completely to adorn his palace in Meknes. What you see today is a mere shell but it does give a sense of the massive proportions involved along with sunken gardens and dungeons. As so often in Moroccan history buildings were destroyed by conquerors or successors building their own stately palaces. There are fine views from the towers of the Medina and the Atlas mountains. Storks nest on the ramparts as they do along the high walls of the Royal Palace adjoining it. The Marrakech Folklore Festival Son et Lumiere with Berber dances and music takes place in July in the grounds of the El Badi and its huge ramparts and walls provide an imposing historical venue. The El Badi Palace has a museum and exhibits of which includes and a 12th-century minbar that once stood inside the Marrakech Koutoubia Mosque.

The Royal Palace, whose high walls and gates follow on from the El Badi, is also known as Dar el-Makhzen, is part of the imperial grandeur of Marrakech. It was built on the site of the Almohad Kasbah, by the Almohads in the 12th century and underwent changes by the Saadians in the 16th century and the Alaouites in the 17th century. It was one of the palaces owned by the Moroccan king, and the palace employed the most accomplished craftsmen in the city. The rooms are large, with unusually high ceilings for Marrakech, with zellij and cedar painted ceilings. At the entrance is an ancient pulley fastened to the ceiling. 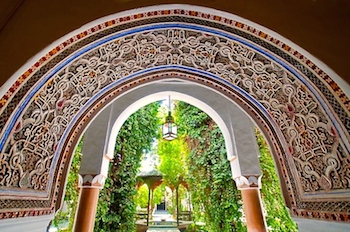 Dar Si Said, also known as the Museum of Moroccan Arts, is located to the north of the Bahia Palace, right from the Rue Riad Ziroun el-Jedid. It was formerly the house of the brother of Bou-Ahmed, Sisi Said. The collection of the museum is considered to be one of the finest in Morocco, with jewelry from the High Atlas, the Anti Atlas and the extreme south; carpets from the Haouz and the High Atlas; oil lamps from Taroudant; blue pottery from Safi and green pottery from Tamgroute and leatherwork from Marrakesh. There is also a fine small garden laid out in classic Moroccan style but the glory of Dar Said is the carved and painted ceilings on the top floor which are the finest example of painted ceilings in Marrakech. Some of the wooden screens and frames were recovered from the El Badi palace. Today in the Middle East, Moroccan craftsmen are sought after as creators of Moroccan carved and painted ceilings in palaces and corporate headquarters. Their craftsmanship was displayed in the New York Metropolitan Museum exhibition “The Moroccan Court” in New York in 2011 and in the following year at the Shangri-La residence in Honolulu as part of a promotion for Moroccan business and cultural exchange between Morocco and Honolulu. 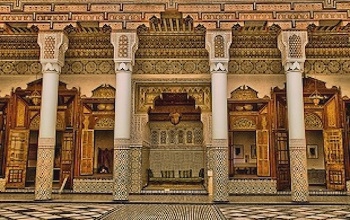 The Dar Menebhi Palace close to the Medersa Ben Youssef was built at the end of the 19th century by Mehdi Menebhi. The palace was carefully restored by the Omar Benjelloun Foundation and converted into a museum in 1997. The house itself represents an example of classical Andalusian architecture, with fountains in the central courtyard, traditional seating areas, a hammam and intricate zellij tile work and carvings. The museum’s large atrium (originally a courtyard, now covered in glass and fabric) contains a very large centrally hung chandelier consisting of metal plates decorated with fine geometric and epigraphic cuttings. Several features of the original courtyard, including the floor-set basins and mosaics have been retained. The museum holds exhibits of both modern and traditional Moroccan art together with fine examples of pottery and ceramics from Fes and Moroccan Jewish, Berber and Arab cultures.
Dar El Bacha

The Dar El Bacha on the Rue Bab Doukala was the palace of the Pacha of Marrakech, Thami El Glaoui, who was Pacha from 1912-1956. He entertained the cream of western high society with parties at Dar El Bacha with Winston Churchill, Colette, Maurice Ravel, Charlie Chaplin and many others. As he collaborated with the French protectorate and contrived to remove Sultan Mohamed V into exile in Madagascar, he was and remains, unpopular to this day. Although Sultan and later King Mohamed V forgave him on his return from exile, all Thami’s properties were confiscated after his death in 1956. The Dar El Bacha is now a Royal Palace and a trade union federation occupies part of its imposing edifice. It was rumored that a museum was to open there but nothing has transpired. Many would like to visit this palace but it remains closed.

For more information about Marrakech’s Palaces on a Guided Tour

Travel Exploration Morocco donates 5% of our proceeds to Berber Villages through our charity organization called Project Feed. We are an ASTA approved travel agency and has won several accolades for our travel expertise.

Renowned architect, Sir David Chipperfield is the creating a distinct and contemporary building for the MMP. The Marrakech Museum for Photography (MMP) offers a rich program of exhibitions, education and cultural exchange will making it a first example of this kind of artistic institution on the African continent.

David Knaus is the Marrakech Museum for Photography and Visual Arts Managing Director. Inclusive in their programming is educational scholarships, exhibitions that are contemporary and showcase a host of Moroccan and non-Moroccan talent. 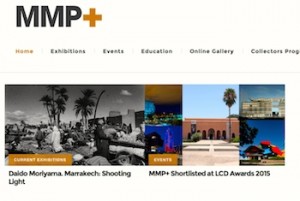 The MMP’s website offers showcases its events, an online gallery, a Collector’s program along with information that is up-to-date on current exhibitions. Established in 2012 as a non-profit institution, the Marrakech Museum of Moroccan Photography prides itself on being dedicated to exhibiting the best of Moroccan, North African and international0lens-based contemporary arts.