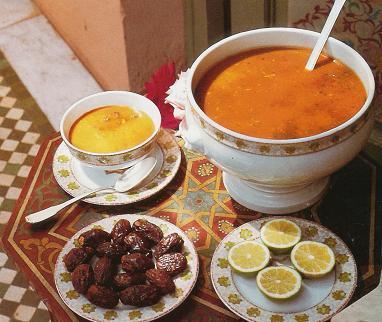 As both a starting point and a destination for merchants along ancient trade routes Morocco developed a cuisine that has Arabic, African, French, Mediterranean, and Middle Eastern influences. This blending of cultures and ideas makes Moroccan cuisine unique and often quite surprising. Extensive use of dried fruits such as dates and figs, preserved lemons, nuts, and the blending of fresh herbs and spices gives Moroccan cuisine its distinctive, and delicious, taste. 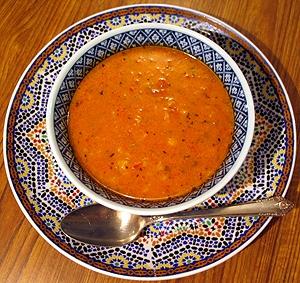 While traditionally only served during Ramadan or at weddings Harira is a Moroccan favorite that is hearty enough to be served as a meal on a cold winter’s night, find the recipe below and don’t forget the crusty bread!

Assemble the remaining ingredients and follow the steps below.

Put the meat, soup bones and oil into a 6-qt. or larger pressure cooker. Over medium heat, cook the meat for a few minutes, stirring to brown all sides.

Cover tightly, and heat over high heat until pressure is achieved. Reduce the heat to medium, and cook for 20 to 30 minutes. Remove from the heat and release the pressure.

Add the lentils, tomato paste mixture, and 2 quarts (or about 2 liters) of water to the stock.

Set aside (but don’t add yet), the vermicelli.

Cover the pot and heat the soup over high heat until pressure is achieved. Reduce the heat to medium and continue cooking.

Adding vermicelli: Cook the soup on pressure for 45 minutes. Release the pressure, and add the vermicelli. Simmer the soup, uncovered, for five to ten minutes or until the vermicelli is plump and cooked.

While the soup is cooking, mix together the 1 cup of flour with 2 cups of water. Set the mixture aside.

Stir or whisk the mixture occasionally. The flour will eventually blend with the water. If the mixture is not smooth when you’re ready to use it, pass it through a sieve to remove balls.

Once the vermicelli has cooked, taste the soup for seasoning. Add salt or pepper if desired.

Bring the soup to a full simmer. Slowly — and in a thin stream — pour in the flour mixture. Stir constantly and keep the soup simmering so the flour doesn’t stick to the bottom.

You will notice the soup beginning to thicken when you’ve used approximately half the flour mixture. How thick to make harira is your own preference. I like to thicken the broth so that it achieves a cream-like consistency.

Simmer the thickened soup, stirring occasionally, for five to ten minutes to cook off the taste of the flour. Remove the soup from the heat.