Getting to know Morocco for the First Time, Your Morocco Tour Guide 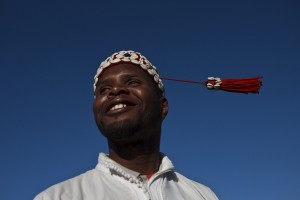 Morocco has a diverse and vibrant culture close to Europe just 13 km from the coast of Spain yet with growing ties with the Middle East where the oil rich Gulf countries are investing substantially in Morocco’s tourism industry.

Morocco also has close contacts with Africa. It is at the crossroads of many cultures absorbing  the  commercial dynamism of the West  in building its growing  tourism industry with  enhanced infrastructure such as  auto routes , trains, airports and ports whilst maintaining its  ancient traditions and  Arab and Berber culture. It still has an aura of ancient oriental mystery and originality whilst also being highly accessible and attractive to tourists.

Tourism has more than doubled since 2002, to nearly 10 million visitors in 2011.  Under the Vision 2020 Plan King Mohammed VI wants to increase the annual visitor numbers to 18 million by 2020. It is the only country in North Africa to have successfully maintained its tourism industry in the face of the global recession.

Morocco is a stable and peaceful country . It is the only country in North Africa to have enacted a new constitution in response to the  Arab Spring and King Mohammed VI remains central to the lives of his subjects.  It is important for tourists to respect Morocco’s traditions and culture.

Morocco is a Muslim country committed to allowing other religions to practice their religion freely , particularly Christianity and Judaism which are recognized as  religions of the book, to practice their religion freely. Morocco is a conservative society but its people are very welcoming, friendly and easy going. During Ramadan whilst you can always have a meal in restaurants in the tourist cities it is best not to eat and drink in public during day light hours as muslims cannot eat or drink or smoke until they break the fast when the sun goes down.

Moroccan men treat their café is their local club where they meet socialize and discuss business while drinking coffee or mint tea and watching the world pass by. If you buy pastries or cakes in a bakery it is ok to eat them in the café at no extra charge. 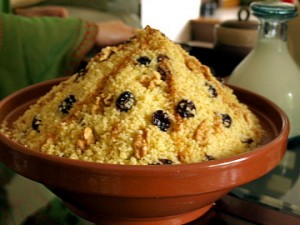 Moroccan cuisine is renowned for its delicacy and abundance with traditional tangines, couscous, mechoui (lamb) salads and desserts and an abundance of fresh fruit and vegetables. In the main cities there are also French and european cuisines available, a multiple choice is available.

Most Mosques are closed to non believers however you can visit the impressive Hassan II mosque in Casablanca, the Berber mosque at Tin Mel outside Marrakech on the way to Ouarzazate, the former Islamic college the Medersa Ben Youssef in the Marrakech Medina and  the old Medersas in Fés Bali, the Bou Inania  and the El Attarine . These sites will give you some idea of the glories of Moroccan Islamic architecture.

Most Moroccans in the cities speak French as well as Arabic or the Moroccan dialect Darija. The French Protectorate was established in Morocco in 1912 and lasted until 1956.  French remains the language of business whereas Darija is spoken in the street and at home, Darija itself is a mixture of languages including French words and Moroccans happily switch from one language to another in conversation. Spanish is spoken in the north and south as there was also a Spanish protectorate. However there has been a marked increase in the number of young people speaking english as it is taught in schools. Those working in tourism will probably speak good english and the business centers of Casablanca and Tangiers  also has more english speakers.

On a first trip to Morocco it is important not to try to do too much in a limited amount of time. The ancient  Medinas  of Fes el Bali of Marrakech can be combined by other nearby locations in the case of Fes, the imperial city of Meknes and the ancient  roman ruins of Volubilis, or in the case of Marrakech, the nearby  fishing port and beach resort of Essaouira, no hassle and cheaper than Marrakech it is just  two hours drive away, Agadir can be combined with the Sous Draa valley with its Kasbahs  or the desert town of Ouarzazate. Further South  you can visit the desert at Merzouga and the Erg Chebbi sand dunes. Tangier can be combined with  trips to Tetouan and Chefchaouen Morocco’s blue and white town and the Rif mountains.

There is an infinite choice which is a tribute to Morocco’s development of its tourism industry and you should try to plan your trip with your travel agent.  On your first visit it is best  to avoid driving hire cars yourself as Moroccan traffic is very different from driving in Europe or  America. A car or 4X4  with a good Moroccan  driver is a better  bet or  you can  travel on Morocco’s ONCF railways  in first class airconditioned carriages.

Many tourists like to stay in small guest houses called Riads to be close to the ancient Medina which have been restored by local  berber craftsmen . Roof top views offer an insight in to the life of the Medina.

In Marrakech,  Vanessa Branson’s Riad El Fenn has prime views of the Koutoubia Mosque minaret lit up at night with a laser beam nearby , whilst  five-star La Sultana overlooks the Atlas Mountains. 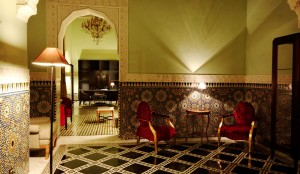 In Fes  three riads are Dar Roumana, a traditional restored Anadlusian palace style Riad with library and Chef that specializes in Moroccan cuisine, Dar Roumana is well-located in the central medina, Riad Maison Bleue and Riad Fes are other luxury guesthouses comprising e beautifully restored riads. They both have a pool and Spa.

Others prefer  the many fine hotels in the modern part of town many of them from well known international hotel  with restaurants,  swimming pool and gym and there are a number in most cities. The choice is yours. The Accor group has Sofitel properties located in Casablanca, Fes and Marrakech, there is a Four Seasons in Marrakech and a new, modern boutique hotel in Fes called Palais Faraj.

When visiting the souks in Marrakech and Fes  for the first time you can pay an official tourism  guide from the government  ONMT tourist office who can help fend of hustlers and take you to shops of interest, although he may take a commission from the shop which will be added to the price you pay. You may want to memorise the Arabic phrase “La Shukran” , No thank you.

After the first visit when you know your way around in the souk and the maze of the medinas of Fes and Marrakech you can enjoy the adventure but be sure to keep to the side of the narrow streets and derbs, as the narrow alley ways are called, to avoid motor scooters and donkey carts who may cry “andak!” which means watch out.

For More Information about a Morocco Tour or traveling to Morocco for the first time.