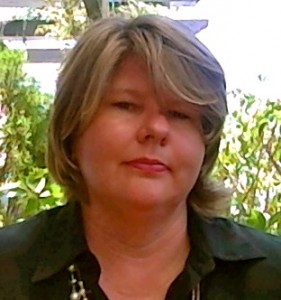 Jeanette Lowdon, Garden Enthusiast covers Carey Duncan’s work across Morocco’s private and public green spaces. Lowdon recently had the opportunity to interview the well known Landscape Architect, Carey Duncan, at Cafe La Poste in Marrakech. Sitting on the colonial style porch savoring a gourmet lunch, Duncan chatted about her life in Morocco and her honorable achievements within the development, restoration and garden design field in Morocco.

Carey Duncan, a South African native, was first struck by Landscape Architecture while attending school in Johannesburg with its beautiful gardens bordered by a wild urban nature reserve. Her father also fueled her passion as she watched him create a paradise out of an old rubbish dump in the garden of the house he built and lived in for 45 years.

While in University Duncan met her future husband, a Moroccan studying on a grant from USAID and the government of Morocco. After graduation she went back to South Africa for two years and worked as a private consultant in the fields of Urban Planning and Landscape Architecture. She later married and joined her new husband in Morocco. 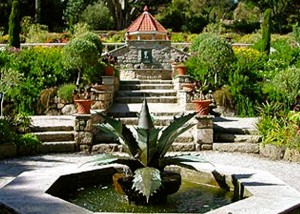 In 1992, after arriving in Morocco Duncan discovered that locals were not familiar with the field of Landscape Architecture. Concerned about the possibility of Carey being able to work in her chosen field, her sister came to Morocco with a British Homes and Gardens magazine in hand. Inside the magazine was an announcement for an international competition to design a Mediterranean garden in the Tresco Abbey Botanic Gardens on the Isles of Scilly, England. It was the first major intervention in the garden in 100 years. Duncan came up with a design which she remembers thinking, “it’s not earth shattering, but it works.” Following her instinct, she created it and won first prize. Her confidence was strengthened which encouraged her to continue her work which resulted in her winning contracts for  projects in Morocco.

Carey has had a few selective favorite projects that she considers key to her career. Most notably is the rehabilitation of the mineral spring esplanade in Sidi Harazem, which was her first major public project. Renovating the gardens of Palais Marshan and designing the Esplanade of the Presidential Palace in Nouakchott and later the gardens of the Residence, were also challenges that she enjoyed. This set her up to work on the Jardins Exotiques in Bouknadel, a project that took several years of intensive on site work. Since then, she has worked on a variety of restoration projects, in Fes, Rabat and Oujda, often with the collaboration of architect, Fadel Guerraoui. Carey’s top project on her list is an open space network in the small town of Oued Zem near Khouribga. 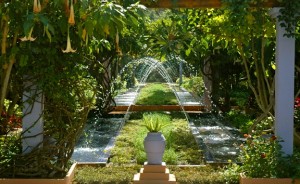 One of the larger and more well known projects Duncan worked on was the Rehabilitation Project of the Exotic Gardens, Sidi Bouknadel for the Foundation Mohamed VI set up for Environmental Protection of Morocco’s heritage sites.

The Exotic Gardens Sidi Bouknadal in Sale, is set on a 18 acre plot of land originally bought by Marcel Francois in the 1940s. For over 4 years Duncan worked to restore the garden to its former glory as in the days of its creator, Marcel François. The gardens were completely run down, bridges disappeared, eroding paths and the incredible plants and trees had received no maintenance for decades. The bridges, paths, walls, monticules had to be entirely redone”, says Duncan. With very little information or photos, Duncan and her colleagues relied on descriptions from the old gardeners who were still on the site and on interpretation of some of the ruins that were left. Most of the plants were original and were restored with care. Adapting to modern technology and contemporary requirements, the project began.

Duncan recalls, Marcel François used to design decorations for aquariums. You can sense this as you walk through the garden, where he takes you down into a subsurface cave, gliding past monticules that look like termite mounds, and then up into the tree tops on swinging bridges – the visitor experiences several strata just as fish does in an aquarium.”

Another restoration project Duncan worked on was the The Jardin D’essais in Rabat originally laid out by JN Forestier in 1924. The ancient garden of Colonial Rabat is one of the green spaces that structure the city of Rabat as laid out by Prost. “It was initially a garden to test new varieties of fruit trees and how imported ones could be acclimatised” says Duncan. Organized along a central perspective with a series of rectangular gardens grafted onto either side of the central path, a series of themes are presented, based on the original trials that were conducted by INRA at the time. 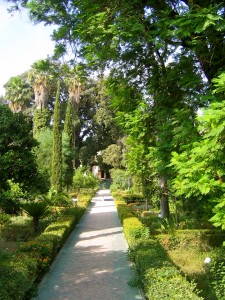 The famous Dar Batha in Fez was restored by Duncan in 2005 as part of a tourist trail in the heart of the Fez old Medina. Duncan worked with Cotecno and Architect Raffael Gorjux from Italy recreating the Andalusian Garden while keeping existing large trees, but replanting the undergrowth which was either bare or overtaken by weeds, and revitalizing the existing planting. “It was particularly difficult as the current legislation for preserving historic monuments does not take into account the changing nature of gardens over time and the requirement to prune, shape and weed. So a committee had to convene almost every time we needed to pull out a weed!” says Duncan.

Duncan has collaborated with a number of Landscape Architects from several different countries on various projects, in order to bring local knowledge and expertise to hand. After 20 years here she claims, “I am considered a local!”  Duncan says, “The most interesting of these partnerships was with Hart Howerton from San Francisco. It was a very exciting and difficult project given the complicated topography and the difficulties surrounding the preservation of the mythic argan trees on the site.”

When asked about how has she educated the nurserymen in plant choices Duncan says “The nursery industry in Morocco has developed a lot in the last 20 years, but there is still a long way to go. It is ironic that a lot of indigenous plant species are not available in cultivation for landscape use. After slowly hammering away at growers, and with the growth of demand, we are starting to see local species being cultivated for sale as landscape plants.”

As the Secretary General for the AAPM Duncan states “We would ideally like to have our profession given recognition and a scale of fees agreed upon and made known to the general public.  We need to promote our profession which is not officially recognized in Morocco”. Presently, they have made great strides in their goal by gaining membership in the IFLA – the International Federation of Landscape Architects. Duncan spoke with passion saying “We do want to strive for the separation of client – designer – and contractor to ensure quality landscapes for our clients, but for the country in general as well.”

The “local” as she is now known in Morocco has given so much of herself in the 20 years that she has been working in Morocco as a Landscape Architect. She is now fully booked each week as she travels to a different city nearly every day.

Morocco is very lucky to have this talented woman at the helm of this business. She is a role model for all students of Landscape Architecture and City and Regional Planning. Anyone would be lucky to be graced by her wealth of knowledge and expertise in this field.