Travel to a Moroccan Music Festival – The Gnaoua Festival

For the past ten years one weekend every June the Moroccan city of Essaouira has come alive with the music of the world. From traditional Moroccan Gnaoua to jazz and blues the Gnaoua Festival and Musics of the World Essaouira offers music to suit any taste and is a must-see for music lovers worldwide.

The Gnawa are descendants of African slaves who came together to establish brotherhoods throughout Morocco. Despite being Muslim, the Gnawa blend African and Arabo-Berber customs to create their unique music-based rituals. These rituals are based on djinn – or spirits- that come straight from the African cult of possession. Their most important ceremony is Lila during which the maalem – or musicians – call upon the saints and supernatural entities to take possession of their followers. The followers and listeners of the music then fall into trances, the ceremony itself is said to be therapeutic.

Beginning as a place for the Gnaoua to emphasize and appreciate its musical diversity and heritage The Gnaoua Festival invites jazz, blues, electric fusion, and Moroccan contemporary artists from around the world to perform at one giant festival. It is now celebrating its 11th Edition with over 500,000 festival goers. The city of Essaouira comes alive with the hums, beats, and dancing of thousands of music lovers uniting under one sky.

The festival itself is comprised of 10 different stages, in different parts of the city, each one representing different artists and music from around the world.

This year, in celebration of 10 successful years of the Gnoaua Music Festival, the Gnoaua musicians will be honored with a new stage.  This stage, dedicated to them at Bab Doukkala, will allow their most dedicated followers and ardent listeners to experience a 100% Gnoaua concert.  Gnoaua stars such as Hamid El Kasri and Abdelkebir Merchane will be performing the traditional Lila ritual every evening at midnight.

On the Bab Sebaa stage jazz and world musicians will be playing, offering audiences a taste of music from around the world.  From the Korean traditional percussion group Salmunori to the English bluesman Justin Adams, this stage is sure to delight and engage the crowd with its wide variety of sights and sounds. 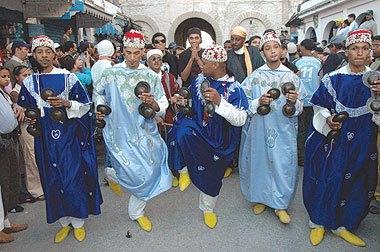 The Moulay Hassan stage, which is located at the beginning of the medina near the port of Essaouira, can support 30,000 people and is the place to experience the unique fussion of Gnoaua and world music.  Combining traditional Gnoaua instruments such as the guembri – a 3 stringed percussion lute – and qraqeb – large metal castenets – with percussion, trumpets, and saxophones from around the world.  Jazz artists such as Wayne Shorter and Eric Legnini are also performing and share the stage with the reggae of Kymani Marley.  The festival ends with a grand performance by the National Orchestra of Barbes on Sunday night.  For those wanting to experience the unique and moving sounds of Gnoaua and world music fussions as well as well-known jazz and reggae the Moulay Hassan stage is the place to be.

Another large stage which can hold 50,000 people is the Bab Marrakech stage, set on 100 meters of the beach this stage offers the perfect place for people to meet and dance to the rhythums of world music.

These two stages, both smaller in size, offer audiences the chance to experience the music of different folk groups from around the world.  At 3:30pm both stages change and the magical Lila music of the Gnaoua musicians begins.

For those looking for more modern-day Electric sound this is the stage for you.  This stage creates a fusion between traditional fusions and talented well-known DJ’s .  The fun and energy at this stage is guarrenteed to get you up and dancing long into the night.

For those looking for a more intimate atmosphere to listen to music Dar Souiri and Kebir’s Place offer acoustic foreign and Moroccan music and traditional Gnoaua music in a small warm setting.  As these two venues can only welcome 250 people space is limited so get there early!

The Young Talents stage offers up-and-coming Moroccan artists a chance to showcase their skills.  Audiences can come for the chance to see the next big thing in Moroccan music.

So whatever type of music you love, whether it is the ritualistic ceremonies of the Gnaoua, the smooth tunes of jazz, or the catchy beats of the bongo drum, The Gnaoua Festival in Essaouira is the place to be.  A place where the music of the world brings the people of the world together.