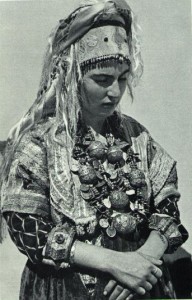 In the nineteenth century Morocco began to receive European and American visitors who were also visiting neighboring Algeria,Tunisia and Libya. Early photographers like the Scotsman George Washington Wilson and others began to take photographs of the countryside, towns and people including posed photographs of Berber women adorned in their fine Moroccan jewelry. These photos became the first travel postcards and help to encourage early tourism and an appreciation of North African jewelry.

Phoenicians, Carthaginians, Greeks, Romans  and Jews mingled culturally with the Amazigh people . When the Arab  Islamic conquest came in the 7th Century the Berber people were assimilated along with the Jewish population under Islamic rule. The exit from Andalusia of the Moorish and Jewish populations in 1492 added another rich creative seam to Morocco’s already talented craftsmen.

The Amazigh Berbers and the Jewish craftsmen permitted to work with precious metals such as gold and silver preserved a unique identity in which jewelry expressed their  social and tribal  customs particularly the use of intricate jewelry as a marriage dowry, central to their way of life and Berber traditions as were carpet weaving, woodwork , and ceramics. North African jewelry preserves the enduring creative diversity and beauty of this living artistic tradition preserved by skilled craftsmen in places such as Tiznit and Taroudant.

The jewelry includes pendants, earrings , bracelets, amber necklaces and the distinctive Berber cross and the Hand of Fatima to ward off the evil eye. The geometric patterns also reflect  tribal identity and in rural areas the jewelry is usually silver, whilst urban jewelry is sometimes made from gold with floral and arabesque designs with filigree and enameling also reflecting  ancient inherited Egyptian, Greek, Byzantine and Roman traditions. Indeed many techniques and materials from diverse locations were used by craftsmen over thousands of years. Beads and coins and amber are common in North African jewelry.

Some materials are believed to have protective and healing qualities and symbolic meaning. Silver is linked with honesty and purity, and when combined with certain stones it is said to heal select ailments. Red Mediterranean coral, associated with life-sustaining blood, is prized for its healing properties. It is worn to promote fertility and to prevent harm to children. Yellow amber attracts sunlight and deflects darkness. 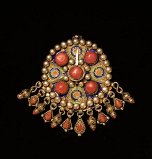 The two brothers, Patrick and Yves Guerrand Hermes have both been remarkable collectors of North African Jewelry. Patrick Guerrand Hermes, the youngest son of the founder Emile Hermes was the  owner of Villa Ain Kassimou in Marrakech . He sold the contents of this villa including an extensive North African jewelry and a large art collection, on 9 October 2009, at Sotheby’s in Paris before moving to Tangier.

This house in Marrakech is known as prestigious occupants. It was originally built for Olga Tolstoy, daughter of the great writer Leo Tolstoy, before being sold to Barbara Hutton, the wealthy American heiress, who was married five times, including Cary Grant and Prince Igor Troubetzkoy. The collection was reported to have embodied the spirit of North Africa and Morocco.

Patrick Guerrand Hermes introduced his brother Xavier Guerrand Hermes to Morocco and he bought a riad in the Medina in 2011. His extensive collection of over thirty years of North African jewelry and photographs “Desert Jewels”  were displayed at the Museum for African Art in New York and the Philadelphia Museum.