The Medina Gardens of Fes, Your Morocco Tour Guide 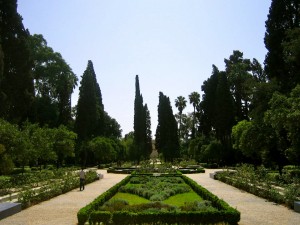 The Medina Gardens of Fes make for the perfect Fes Tour to compliment this UNESCO World Heritage Site’s ancient Mosques, Monuments and Zaouias. The Bab Bou Jeloud is the main entry point to Fes el Bali. This area divided the cities of Fes Jedid and Fes el Bali and was developed into three palace gardens by Sultan Moulay Hassan in the 19th Century. These were the gardens of Dar Batha,Bou Jeloud and  Dar Beida. The Jnan Sbil gardens (formerly the Bou Jeloud gardens) on the north-western edge of the medina has palms, eucalyptus, weeping willows, citrus trees and bamboo. The park was opened to the public by Moulay Hassan in the 19th century. Jnane Sbil encompasses 7.5 hectares and is located in the heart of city. It is one of the oldest gardens in Fes. Because of its historical importance, great care was taken to restore the Jnan Sbil garden to its original design and after four years of detailed restoration and renovation of the heirloom plants, the hydraulic systems and the famous waterwheel, the project was completed and re-opened in June 2010.

The Oued Fes river and the Oued Jawahir (river of pearls) flowed through the garden and a broken down water wheel remains as a reminder of how the medieval city was powered by water wheels which provided craftsmen and their workshops with power. On the western edge near Bab Makina, the Nouria Cafe is still open and is a very pleasant place for tea or lunch. 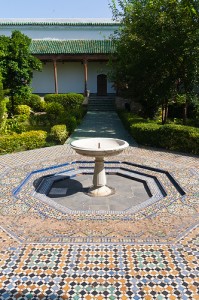 Dar Batha ,which is now the Museum of the Arts and Traditions of Fes, is the only one of these palace gardens open to the public. It is an Andalucian garden which boasts a three-hundred year old Quercus Rotundifolia, Washington Fifera, Cycas Revolta and Moroccan fountains. The Batha Garden is a serene escape from the bustling medina in Fes. It serves as a location for the Fes Festival of Sacred World Music each June.Andalusian gardens are based on the charbagh, the four-part garden with water ways and fountains.

Shaded with citrus trees and perfumed with orange blossom, red roses and sweet-scented jasmine, Islamic gardens were designed for tranquillity, reflection and relaxation in mind, earthly paradises to inspire a spiritual experience and inner peace.

In the arabo-andalousian culture the garden is a major element of  architectural balance and of lifestyle. Fes was one the first cities in the world to built a water distribution network which enabled the city to develop the art of gardening. The city was founded following the muslim exodus from Spain in 1492 following the Reconquista and the exiles from Andalousia brought with them the artistic creativity culture and vision of Moorish Spain which has distinguished Fes ever since. 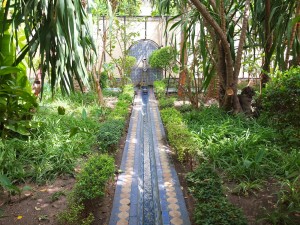 The Palais Jamai which is Fes’s premier five star hotel and also a former palace has a superb  Andalusian garden once the property of the Grand Vizier of Sultan Hassan, Haj Amaati Jamai. The  garden is oldest example of Andalusian style in Fes with Al Hambra Classical Axial lines.

Robert Johnstone, has created a beautiful garden in the ruin at Riad Idrissy which  can be viewed daily from noon until 8pm. Johnstone describes it as “half garden, half allotment.” In it he grows gardenias, a jacaranda, papyrus, and a mix of edibles that are used in the riad’s kitchen, such as verbena, mint, chillies, sorrel, rosemary, parsley and tomatoes.

Jardin des Biehn is based on traditional Islamic forms, with water channels intersecting the garden, and fountains at one end. It was formerly the summer palace of a pasha who housed his concubines and slaves there. Now a boutique hotel, the rooms all open onto the lovely garden, which features roses, irises, large trees and a variety of edible herbs.

Fes et Gestes is a colonial house, which is now a maison d’hote. It has four equal garden beds, with a grand fountain in the centre. 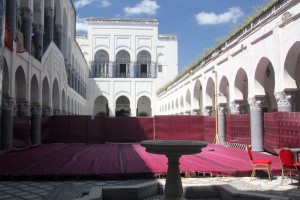 The El Mokri Palace is located on the Southern of the old Medina on a hill – the hill of springs (El Ayoun), on the edge of the small valley of Wadi Fes and above the south gate, Bab Did.Built in around 1906 by Si Tayeb El Mokri, son of the king’s grand vizier the grand palace has a large garden with terraces and fountains. Ryad Mokri also has a a fine and well tended garden.