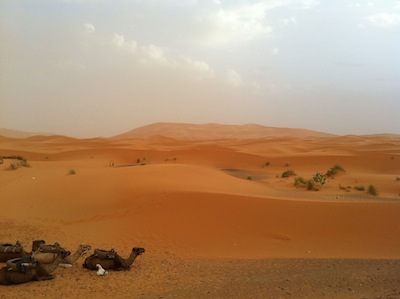 The Sahara Desert is a region worth exploring in Morocco. Morocco’s Sahara Desert is vast and  extensive comprising of four peak desert dunes referred to as Merzouga, Zagora, M’hamid and Erg Chegaga.  Each part of Morocco’s Sahara Desert offers travelers a unique experience. Merzouga is known for it’s vast and golden Erg Chebbi Dunes that are hundreds of meters high. The regions of Zagora and M’hamid are known for longer, rolling more rustic and earthy colored dunes. Their sister Sahara Desert, Erg Chegaga has a legend of being primarily for the die-hard Morocco adventure traveler who wants to say they made it to one of the last regions. Regardless of which dunes are visited on a Morocco Sahara Desert trip any traveler is guaranteed to be enchanted with the region they choose to visit.

With a limited amount of time available for a Morocco holiday, the best way to explore Morocco’s Sahara Desert region is to begin by starting in Ouarzazate. Ouarzazate is one of the leading provinces in Southern Morocco and a former French protectorate administrative center. Ouarzazate is also considered the door to the Sahara Desert and used as a starting point for all Sahara Desert trips and excursions.

To maximize a Sahara Desert regional experience a six day Morocco adventure is most advisable. Travelers can start their desert trip in Ouarzazate with a visit it’s famous Kasbahs. Ouarzazate is known for it’s UNESCO World Heritage site Ait Benhaddou Kasbah along with the Glaoui Kasbahs  called Kasbah Taourirt and Kasbah Tamadaght. Kasbah Tifoultilte is another Kasbah that is worth visiting for tea and a sneak inside at it’s magical interior.

Not to be missed when exploring Morocco’s Sahara Desert region of Ouarzazate is the Atlas Film Studios. The Atlas Film Studios is where David Lean filmed Lawrence of Arabia in the early 1960’s. Since then many famous directors have followed in his footsteps to exploit the magnificent scenery. International blockbusters shot here in recent years include: the French version of Cleopatra, Bertolucci’s Sheltering Sky, Scorsese’s Kundun, Gillies MacKannon’s Hideous Kinky, Ridley Scott’s Gladiator, Black Hawke Down, Oliver Stone’s Alexander The Great, Ridley Scott’s Kingdom of Heaven, and Penelope Cruz’s Sahara. 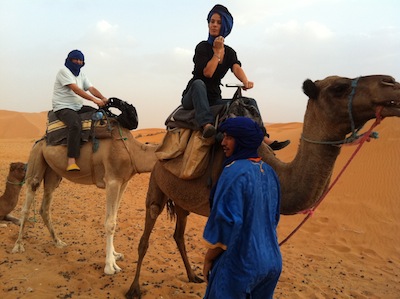 The finale of any Sahara Desert trip is a camel trek on the back of a dromedary into the either the Merzouga Erg Chebbi dunes or those located in Zagora, M’hamid or Erg Chegaga. Each region has several excellent bivouac camps both luxury and budget for an overnight stay. All those who visit the Sahara Desert are guaranteed a Tuareg guide or a Berber guide who will assist a Sahara journey across the silent, mystical dunes.

If time allows then a few other places not to be missed on a Sahara Desert exploration are the Rissani, Erfoud and the Berber Village of Ait Ouzzine. The Souk, the Madid Ksar and fresh bread called  Madfouna are three things not to miss doing in Rissani. For Erfoud, a pitstop to this capital of fossils is a must. For those who truly want to see the “real Morocco” then considering a bread baking lesson, henna time and lunch in the Berber  village of Ait Ouzzine with a Moroccan family is a must.