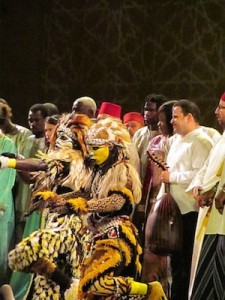 Each year, the holy and ancient city of Fes, Morocco is host to the Fes Festival of World Sacred Music. This festival brings together sacred and world music from many different cultural, religious and musical traditions. This year’s theme, “Fes: An African Reflection” recalls how Fes was once the intellectual, cultural, spiritual and commercial hub of an Empire which traded and connected with its neighbors across mountains and deserts. The opening night of the festival, held on May 22nd at the magnificent Bab Makina venue, wowed the audience as they were taken across the borders of ancient empires to meet these fascinating peoples and learn their customs.

As the daylight dimmed and the swifts ceased circling over the rooftops of Old Fes, the last of the VIPs took their seats at the front of a sell-out venue for the opening concert of the 21st Fes Festival of Sacred Music. HRH Princess Lalla Selma – representing King Mohammed VI, who is patron of the Festival – arrived in a huddle of black-suited security in a stunning white and gold caftan, to a patter of applause and a burst of flashbulbs. Once the audience was settled, the welcome address was delivered in Arabic, English and French and our journey – in the footsteps of Leo Africanus (Hassan el Wazzan, 16th century diplomat, traveler and chronicler of Africa) – took us across North and West Africa, from tribe to tribe and tradition to tradition in a full circle until we returned back to the holy city of Fes. 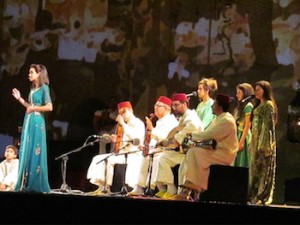 This year’s opening night -for the 21st edition – was a true spectacle. As we journeyed southward, over 100 artists gave us a glimpse of the musical and cultural traditions along the way: from the Amazigh fables of the Moroccan mountains, to the Andalusian traditions of Fes. From the griot heritage of West Africa to the Simb Lion dance of Senegal. With each step along the journey, the backdrop – which began with Fes famous Bab Boujeloud gate projected on the walls of the Bab Makina – changed from Savannah to desert camp, to palm oasis and back to imperial city.

Moroccan oud master, Driss al Maloumi, opened the show with an Amazigh fable about a sad moon under a backdrop of a full moon and a starry sky. Then to follow, Amazigh songstress, Chérifa greeted the crowd.  A real highlight was the Masks of the Moon Bwaba Ritual, the group performing for the first time outside their native Burkina Faso. Their startling black and white costumes and the haunting melody of the percussion accompanied an incredibly energetic and ritualistic dance. On a gentler note, Malian Ballaké Sissoko, gave the audience a real treat as he appeared on stage with no less than 10 koras, of the Kora Ensemble of Bamako.

After a whistle stop tour of Africa, we arrived with Hassan al Wazzan back in Fez, at the tomb of Sidi Ahmed Tijani, founder of the Tijani Sufi brotherhood. The evening concluded with the Tijani brotherhood singing a song familiar to all the Fassi (Fes natives) in the audience.

The opening event certainly got the Fes Sacred Music Festival off to an impressive and inspiring start. Many of the artists present will appear at over 50 concerts and events over the 9 days of the festival until 30 May 2015.

For more information about the Fes Festival of World Sacred Music

The Fes Festival of Sacred Music is one of the widest acclaimed world music events. For fifteen years the festival has been bringing together musicians and visitors from all around the world and uniting them in Morocco with the spiritual music from a variety of different cultures. The idea of the festival is to promote peace through the interfaith music, this years theme is “The Tree of Life.”

East and West meet to form a unique emotional and cultural experience uniting  the public with a shared sense of spirituality. The Fes Festival is one of the most popular festivals in Morocco. Artists come from France, Spain, South Africa, Turkey, Egypt, Iran, Senegal, Armenia, Poland, the U.S., India, Greece and Morocco to create a program with a wide range of art, entertainment, intellectual awareness, and spirituality. Every year the Fes Festival runs for a ten day series.

Each morning there are a series of round table discussions promoting dialogue on cultural awareness and understanding. While there was an increase in conflict in the Middle East it became a crucial goal to increase the understanding. The founders aimed to bring together the world in its many faiths regardless of  the historical atrocities. Musicians, authors and intellectuals come together in hopes to resolve pertinent issues of the times, discussing religion, democracy, music, social justice, conflict resolution and even climate change.

Fes is known for its strong cultural, intellectual and spiritual presence. As a city at the heart of Moroccan civilization, and has been declared a world heritage site by UNESCO. The evening concerts are held at Bab Makina, the entrance to the Royal Palace.  Afternoon concerts are held in the Dar Batha Museum, a slightly smaller area.

The drum is a crucial element for the spiritual music of the Fes Festival. The festival comes alive with Sufi chants, Pakistani qawwali chants, flamenco Christian saeta, Egyption madhi odes, sacred incantations of ancient Indian and Turkish whirling. Locals often fall into chants from the hypnotic rhythms, and the Muslim call to prayer echoes over the loud speakers through the city gates. 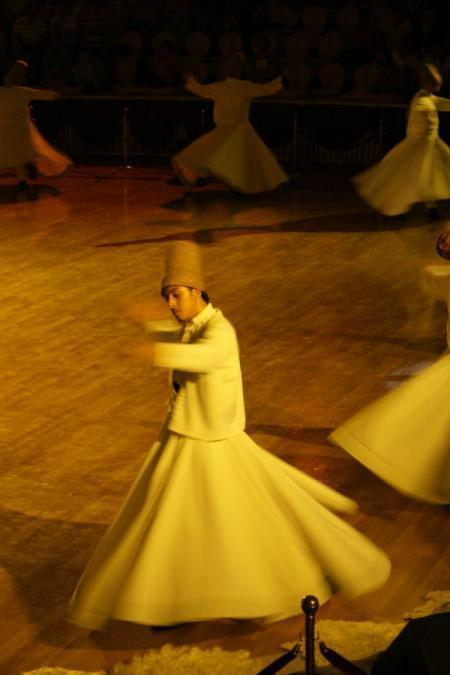 In recent years the festival has opened with Christian, Jewish and Muslim childrens chiors as a symbol of peace and unity. Along with the round table discussions and performances there are also film events, photography and art exhibits. This years program focuses on our origin, existance and individuality and will feature The Gospel According to John by Abed Azrie and Spiritual Songs from the Arab World lead by Sami Yussef. The festival will also focus on the balance between materialism and spirituality.