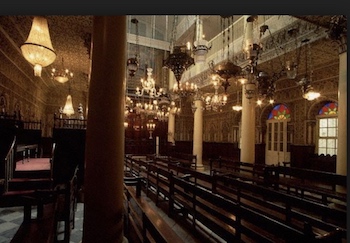 Tangier the capital of the Tétouan Region has a rich Jewish history due to the historical presence of many civilizations and cultures that conquered this area from the 5th century BC. Visiting the Jewish Heritage sites of Tangier on a private one-day tour can serve as a rewarding way to discover Tangier and the Jewish History of Morocco. Whether you are visiting Tangier while at Port for a Shore Excursion or desire a Guided Experience from your hotel, there’s much to see in this cosmopolitan Moroccan city many often refer to as the “Bride of the North.” 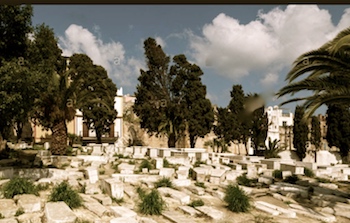 Tangier Arrival. Pick Up at Tangier Med Ferry Port, Airport or at your Hotel. On this On this Tangier Jewish Heritage Tour you will start your morning off visiting Tangier’s Jewish Sacred sites and then continue seeing the highlights of old Tangier. Visit the Moshe Nahon Synagogue in Tangier. Next Visit Chaar Rafael Synagogue. Chaar Rafael is one of the last surviving synagogues and remnants of Jewish Heritage in Tangier. Explore the Jewish Cemetery and the continue onwards to other non-Jewish sites.
Explore the vantage point of the Colline de Bella-Vista. Then, drive to see the Grand Socco, a popular nighttime square close to the Mosque of Sidi Bou Abib and the link between Ville Nouvelle and the medina. Visit the American Legation Museum, located in the oldest American consulate in continuous use. Next, visit the old medina, enter the medina at Rue Es-Siaghinie, the busiest part of this Roman medina lined with cafes and bazaars, a Spanish church, jewelers’ shops and an arts center displaying works depicting Tangier’s social history. Walk Petit Socco which was once the heart of the medina where businessmen and bankers frequented cafes, hotels, casinos and cabarets that have relocated to Ville Nouvelle.
Lunch Suggestions: El Morocco Club or Le Saveur du Poisson or Traditional Moroccan lunch in the city center
Explore the Caves of Hercules (Grottos) and Cap Spartel, a majestic part of Tangier and one not often seen by those passing through. In the late afternoon, take a break and experience Tangier’s cafe scene at the Cafe de Paris, a popular meeting place for Tangier residents, a former favorite of Paul Bowles and other famous foreigners. 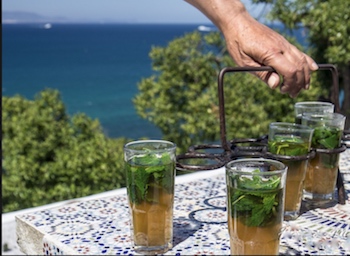 End the tea at Cafe Hafa with a cup of steaming hot Mint Tea. Moroccan Cafe Hafa, is a white-washed restaurant with a terrace and gardens that overlook Gibraltar –perfect at sunset and a former writing spot for Paul Bowles.
Paul Bowles achieved critical and popular acclaim with the publication of his first novel The Sheltering Sky, in 1949 set in French North Africa. The Sheltering Sky was later filmed in 1990 by Bernardo Bertolucci. The film was shot in Morocco’s cities of Tangier and Ait Benhaddou, Ouarzazate. The Sheltering Sky tells a dangerous and erotic journey of an American artist couple, Port and Kit Mores, and their aimless travels through Africa in search of new experiences.
In 1947 Paul Bowles settled in Tangier, Morocco, and his wife, Jane Bowles followed in 1948. Paul Bowles produced numerous musical scores, four novels, more than sixty short stories, many travel pieces and dozens of translations of stories by Moroccan storytellers.
Transfer to the Port or your Hotel. Your Travel Exploration Tour ends here.
For more information about a Guided Tangier Jewish Heritage Tour