The 7 Gates of Tétouan, Morocco

Tetouan is a small city in northern Morocco with a unique heritage of Andalusian and Arab cultures making this green and whitewashed city one of the jewels of Morocco. Situated in the middle of a belt of orchards that contain orange, pomegranate, almond, and cypress trees, Tetouan is picturesquely perched on the northern slope of a fertile valley down which flows the Martil river with Tetouan harbor at its mouth. The streets in Tetouan are wide and straight and many of the houses belong to aristocratic families, descendants of those expelled from Al-Andalus by the Spanish Reconquista. These houses boast marble fountains, orange groves exquisitely carved and painted ceilings in Hispano-Moresque designs, similar to those in the Alhambra in Granada. This charming northern region of Morocco is a melting pot of culture. The Medina of Tétouan is surrounded by a historic wall of approximately 5 km in length and accessed by means of seven gates. 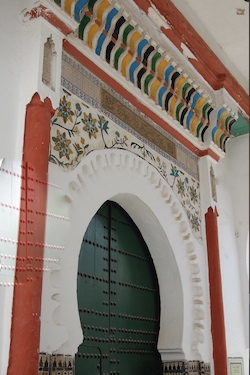 The 7 Gates of Tetouan Bab Okla Tetouan has 7 famous gates, most notable of which is Bab Okla. The attractive gate is the main access point into the medina and is the most photographed. Bab Okla is a convenient entry into Royal Palace at Place Hassan II, the tannery, the Ethnographic Museum, and Ecole des arts et métier de Tetouan. The school is the only arts center in Morocco where students can get a diploma. Tetouan is not advertised for being an arts center however, it is possible to take an art tour of the local crafts industry. Bab Okla is also a gate for history buffs. Not far from the doorway is the entrance into the Souika, the oldest part of the Medina, where General Franco lived. Also nearby is the 12th century, Lalla Fariya Mosque, the oldest mosque in the city. Bab Jiaf Bab Jifaf, referred to as the Door of Remains, is a historical stop made on many Jewish Heritage Tours of Morocco. Jewish funeral processions have passed through this gateway to access to the Jewish cemetery. It also has the nickname of La Puerta de Alfonso, referencing the Spanish king who led the Moors out of Andalucia. 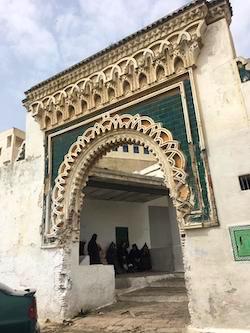 Bab Mkabar Bab M’Kabar, another beautiful doorway into Tetouan’s medina is an area filled with the traditional Moroccan foods. Upon entering you will smell bread, spices, and see Moroccan cheeses and other typical items of the north. The gateway is a good starting position for visiting the sanctuary of Sidi Ali Baraka, a mosque built by Ahmed El Caid in the 18th century. Not far from Bab Mkabar is also the El Fouki Souk which connects with the Feddane square and Royal Palace. Feddane square is a relaxing plaza from where you can enjoy a panoramic view of the white washed medina. In the plaza, the Cafe Granda is an Andalusian restaurant loved for its family-friendly atmosphere. People watch with a  coffee or enjoy some Spanish style food. There is a large space for children to run around and the restaurant is also frequented by locals watching the football games.

Bab Mkabar Another leading gateway into the medina is Bab al Rouah. From this square, there is easy access to the Ghersa-el-Kebira Square, a hub for fabrics, clothes, and other hidden treasures; textile shops and jewelry boutiques can be discovered at Souk El Hout. Bring your fabrics to a Moroccan tailor and see them transformed into decorative gowns or traditional Moroccan kaftans. Bab Rmouz Bab Rmouz, a gateway located near the tower surrounding the medina is an off the beaten track gate. It has historical significance as a 16th-century icon and is connected to the original Andalusian Aromouz family as well as the Spanish Kingdom ruled in the time of by Fernando and Isabella. The Riad Dar Achaach, located along the Rue Torreta – near the green mountains of Tetouan – is an ideal place to stay if you want to learn more about Spanish influence in Tetouan. The riad is owned by a family with a long history of governing Tetouan as well as other cities throughout Morocco. Before heading for the mountains, however, be sure to stop in at the Tetouan Center of Modern Art. Close to Bab Rmouz,  the museum has no entrance fees and displays a collection of paintings from the 1940s mixed with traditional realism. Next, to the museum, you can purchase artisan work at fair prices at the Ensemble Artisanal cooperative.

Bab Saida is nicknamed by Spaniards as Puerta de San Fernand in honor of St. Fernando’s efforts to take Seville away from the Moors.  The door has further historical significance for being tied with the Saeid of Egypt, who lived and died in Tetouan and is buried near the door. Bab Saida, as well as Bab Jifaf, are two gates that can be used to exit the medina. 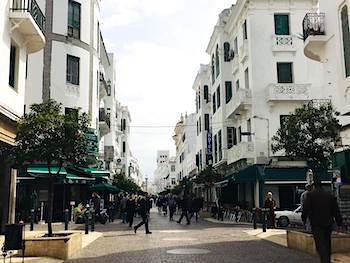 Mohammed V Avenue Just outside of the 7 gates, is Mohammed V Avenue. Pedestrians strolling along Tetouan’s most Spanish Avenue sometimes forget they are in Morocco. The Andalusian whitewashed cobblestone streets architecturally mirror of you will find in the Spanish Granda or Cadiz. Leaving from the direction of the Royal Palace and heading towards the Church, you will pass by several hotels, restaurants, book shops, and cafes with Spanish names. These include the Pension Esparanza and Hotel Bilboa. The Restaurante El Reducto, Blanco Riad, and Restinga restaurant are ideal dining experiences to experience a taste of Spain in Morocco. For something small, you will see cafes advertising tapas. Enjoy patatas bravas, pulpo asado, or grab a bocadilla off the street. For dessert try a cake from the pasteleria across from the Spanish consulate. At night, catch a movie at Cinema Espanol or check for an exhibition at the Institute Cervantes, Tetouan’s cultural center.