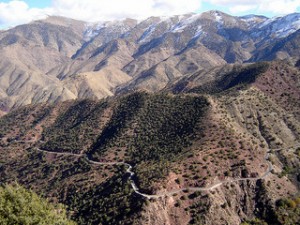 The Tizi N’Test pass from Marrakech, Morocco to Taroudant leads you over the Middle Atlas, heartland of the Berber people, through hair raising hair pin bends at 2,092 meters overlooking valleys and gorges, small fields and mountain villages. It was here from Tin Mal, the site of the famous Berber mosque that the Almohads rose up and took Marrakech from the Almoravids in 1152.

This winding route is not a drive that is recommended to first timers and no one travels it at night. Nowadays the motorway from Marrakech to Agadir means that most of the commercial vehicles do not take the mountain pass which means less hair raising over taking, hoping that no one is coming round the corner. First timers are well advised to hire an experienced driver to travel in safety and enjoy the views which are amongst the best you will see in Morocco. The volcanic period centuries ago provided incredible geographical mountain features crowned now with a variety of greenery, trees and earthen berber villages.

The French administration completed the road in 1929 and it is a remarkable feat of civil engineering. It opened up a natural mountainous barrier which preserved Berber independence for centuries. When Sultan Moulay Hassan and his army tried to cross the Tizi ‘N Test pass in 1893 in a blizzard they were saved by the brothers Madani and Thami El Glaoui and the Sultan bestowed a Krupp cannon and regional powers on his saviors. It was a turning point in Moroccan history and Thami El Glaoui went on to be Pacha of Marrakech from 1893 to 1956. To travel this winding route is to understand the history of the Berbers as well as enjoying a fine adventure and some of the best views in Morocco. 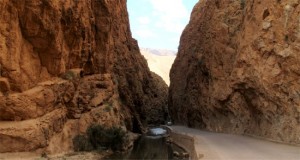 The winter snow capped Atlas mountains towering over Marrakech are an unforgettable sight and the Ourika valley with its river and green pastures seen from the road snaking up from the road along the side of the valley is also one of the wonders of Morocco . You descend to the picturesque village of Ourika and go on up to the waterfalls of the Setti Fatma shrine and the stony river bed which leads on into the mountains.

You can ski in winter at nearby Oumkaimeden and view Mount Toubkal close up from the trekking station at Imlil. Trekking in the area or climbing Mount Toubkal is a great adventure and you can also enjoy the forests and mountain walks of Toubkal National Park which is nearly 250,000 acres in size, or take to a bicycle or mountain bike. It is rare to find such natural beauty and extensive adventure opportunities within easy reach of a major city like Marrakech.

On the eastern side of the Atlas Mountains is the Todra Gorge with its huge canyon which is an immense rock formation running seven miles through the mountains and an attraction for trekkers. You can also visit the Dades Gorge 100 kms north of Ouarzazate between the Middle and Anti Atlas. Besides being home to many ancient Kasbahs it is a site of remarkable beauty running alongside the Dades river.

South of Ouarzazate is the desert town of Merzouga and the Erg Chebbi which is one of Morocco’s two great erg’s, the other being being the Chighaga Erg near M’hamid. They are a mass of sand dunes which change their formation with the blowing of the wind so that they are never the same. They reach a height of up to 150 meters. Erg Chebbi spans 22 kilometers from north to south and up to 5-10 kilometers from east to west. This is a chance to experience the stillness and beauty of the real desert and to take a camel trek or a four wheel drive vehicle and sleep out under the stars in a desert camp.

Morocco has 3,500 miles of pristine unspoilt beaches stretching from the Dakhla in the South along the Atlantic coast through Agadir , Taghazout, Oualidia, Essaouira , and new resorts such as Lixus, Mazagan, Taghazout and Plage Blanche offering excellent opportunities for surfing. Morocco’s Mediterranean coast has beaches from Tangier and Asilah to Al Hoceima and the new resorts of Tamuda Bay and Saida. The Mediterranean beaches do not have the strong undercurrents present on the Atlantic coast and there is good scuba diving at Cabo Negro.

Morocco’s natural wonders also include a number of national parks and forests in both nortern and southern Morocco. Toubkal National Park is the oldest and largest. The others are found at Al Hoceima , Haut Atlas Oriental National Park, Ifrane, Merdja Zerka ,Souss Massa, Talassemtane and Tazekka National Park. These extensive cedar forests are home to wildlife such as golden jackal, red fox, leopard, barbary apes and extensive bird life. Morocco is home to important wet lands including Merja Zerga on the Atlantic coast which hosts 1,400 species of birds many of them migrating. Between 15,000 and 30,000 ducks are said to winter at the lagoon, and it regularly holds 50,000 to 100,000 waders including flamingos.

For More Information about Natural Wonders of Morocco