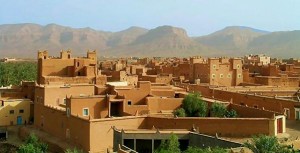 The Sagro Mountain region and Ait Ouzzine is the ancestral village of the Ait Atta a Berber tribe which resisted the French up until a treaty was concluded 1933 and never submitted to Thami El Glaoui Pacha of Marrakech during the French protectorate 1912-1956. The Ait Atta belong to the Ait Atta Confederation which covers Ouarzazate, Errachidia, and Azil Provinces. The tribe existed prior to the Arab Islamic conquest in the 7th century and was the leading Berber tribe between the 15 and 19th century. Fiercely independent, their stronghold was the Saghrou Mountains which surround Nkob and its villages. A trek in the Sagro Mountain region includes a five day treks tarting from the Dades valley via the Saghrou Mountains to Nkob. You can also visit the Valley of the Roses on the high plateau of El Kelaa MGouna when visiting this region as well or arrange a home stay with a Berber family through a reputable Moroccan travel agency that specializes in travel in Morocco’s Berber villages, the Draa Valley and the great South.

Nkob has 45 kasbahs, a tribute to its ancestral importance and its key role in the caravan trade route with Timbuktu. It reveals much about Berber life and culture in southern Morocco as well as being a tranquil haven and a staging post for trekking in the region and the Saghrou Moutains. The Saghro Mountain region was also once known for having a significant Jewish population. The Jews co mingled with the Berbers and lived side by side and intermarried, prior to the 7th Century Arab invasion.

Nkob is located on the road between Ouarzazate and Tazzarine. This is on the southern road which connects Marrakech (340 kms from Knob) with the Erg Chebbi Dunes in Merzouga. Ouarzazate is 136 km from Nkob.

As well as investigating the village of Nkobs’ Kasbah’s there are two surrounding oases. There is a Friday animal market and a Saturday and Sunday Market for local produce. The Nkob souk is the 2nd biggest in Zagora Province. Items include handmade leather shoes and sandals at the Ait Atta Shoes shop. Nkob also specializes in high quality henna as Nkob located in the Zagora region of Morocco where henna grows. Nkob is also known for its organically grown almonds. Other items include berber cosmetics and clothing such as caftans and colorful berber dresses.

Restaurants include the Kasbah Ennakhile with home cooked Berber food serving lunch time from 12pm to 3pm and dinner from 8pm to 10pm. At the Restaurant Merzouga you can eat traditional Moroccan fare cooked on a real wooden fire. It is a great chance to taste authentic Berber cuisine . 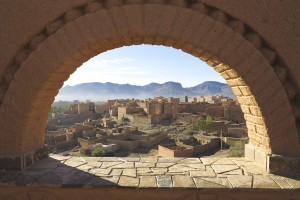 There are a number of hotels and bed and breakfast accommodations in Nkob including:

Hotel Kasbah Ait Omar, a charming five star well-restored Kasbah located in Nkob with views of the palmeraie and luxuries equivalent to those provided in Imperial City Riads. This quaint restored Kasbah is owned by a German couple who bought the Kasbah from a family and restored it to its original glory. Fitted with a Roman style swimming pool, a glorious hammam, floor heating and charming Berber decor, this Kasbah Hotel is the place to stay in Nkob. A Travel Exploration favorite and the best in the region. Excellent amenities, service, food and location.

Ksar Jenna is 2km before Nkob on the road to Ouarzazate and just across from the village Ait Ouzzine. This lovely Riad has a garden setting and rooms built around a center courtyard. Boutique and charming with a small view, the Riad has an Italian tiled and Moroccan decor. It serves as a wonderful place to stay. No swimming pool yet the food and atmosphere make up for it. Midrange traveler option for the region. Excellent food, service and location.

The Kasbah Imdoukal is in the centre of Nkob. It is family owned, has traditional decor and a swimming pool. This Kasbah is for those traveling on a mid-range budget and want comforts not provided by for example Kasbah Baha Baha. Good food and location.

Kasbah Baha Baha is a restored 10 room Kasbah with a restaurant and swimming pool on the road to Saghrou. It is family owned and reasonably priced for those traveling on budget. There is an option to sleep in a standard room within the Kasbah or a Berber tent. Good Budget traveler option in the region. Good food and location.