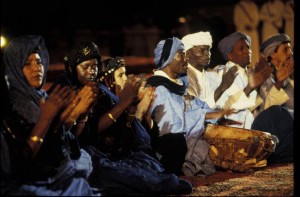 Guelmim, famous for its blue people and as the gateway to the Sahara is in the South west of  Morocco. It is the capital of the Guelmim-Es Semara region which includes Southern Morocco (south of the Souss-Massa-Draa region) and northern Western Sahara. It can be reached easily by road from Agadir.

It’s  a walled town with houses built of red clay and is encircled by date palm groves. It was a  camel caravan trading centre linked to Timbuktu in ancient times and in the 19th century, and it remains a commercial gateway to Mauritania.

Guelmim is home to the biggest camel market in Morocco which is held every Saturday at daybreak. Nomadic camel herders are still common. 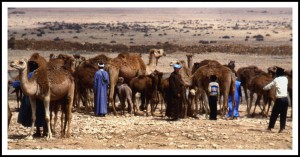 There are a number of tribes at the event including the Regeibat , Aït-Moussa-Ali, Aitoussa, Azwafits, Aït-Yassin, Aït-Lahcen, Aït-Baamran,Sbouya. The “Blue Men of the Desert”  or  Tuareg are so called because they wear indigo colored robes and a long blue scarf or tagilmust they use to swathe their heads and faces. The indigo is pounded, instead of boiled, into the cloth. There are also, of course, people pretending to be blue men to attract tourists.

As well as the weekly Camel Fair, the people of Guelmim hold an annual Camel Festival  every July. The festival is more of a tourist attraction than an actual market, due mainly to the decline in camel transport and the rise in 4x4s. The festival  offers the opportunity to witness the ancient dance ritual known as the Guedra, which is associated with Guelmim. The dance is performed by a woman to the beat of a drum made from a kitchen pot (guedra) and the chanting and clapping of onlookers. The dance often induces a hypnotic state. There is a festive atmosphere and meshwi, a whole roasted lamb, is cooked.

When in Guelmim, a good place to visit is Fort Bou Jerif, which is the remains of a Foreign Legion fort. This  is located in miles of undulating hills and sandy shrubbery, halfway between Guelmim and the Atlantic coast.

It can only be reached by tracks and a tour guide with a 4×4 is essential and should be arranged beforehand. As if from nowhere, the Fort will appear, with lovely looking buildings, including a hotel, a motel, a restaurant, a shop, and a camping site.

A short drive away is Plage Blanche, a large and virgin  sandy beach. An alternate  location to visit is at the former Spanish enclave of Sidi Ifni, it has an excellent beach and art deco buildings. Taghazout which is being developed as a major tourist resort is on the road back to Agadir.